While the country braces itself up to a torrid summer and a drought across most states in the country, a few thoughts, or rather questions, come to my mind.

Water is the source of all life on this planet. 71% of the earth's surface is covered by water and the oceans hold roughly 96% of the water. Not just that, even adult bodies have approximately 55% of water. Now for most of us who know this, it should be comforting, isn't it? With so much water, we don't need to bother to judiciously use, store and manage it, do we?

Unfortunately the 'learned' and 'not so learned' share the same approach, when in plenty why conserve? In fact, if one experiences a year of poor rainfall, we pull through that year somehow. We, as a country have the amazing ability to adjust and move on under any circumstances. This is a great quality as long as we don't become complacent and forget the problem all together.

Unfortunately we tend to move on without giving a second thought of what we will face were the problem to repeat itself again. 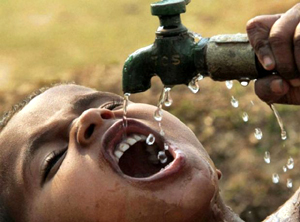 Think about it, have you been experiencing water problems every few years? Has there been a perennial shortage of electricity especially in summers? Karnataka, a state otherwise blessed with plenty of natural resources has been facing crisis after crisis, year after year. Since my childhood, I remember, summers meant power cuts and invariably water shortage. The denizens of the bigger cities/towns are the luckiest of the lot, the cuts are minimal as compared to the rural areas where power cuts could be anything ranging from 4 to 10 hours daily. The rural areas cant afford power backups nor can they take the help of water tankers.

Isn't this really sad? After all, can we not take steps to avert these repetitive critical problems? Population has been growing every year with amazing alacrity. Malls, buildings and other so called forms of development need to be backed with basic infrastructure like water reservoirs, dams and power plants. To my mind as a layman, these are not impossible tasks, they are nevertheless time consuming and capital intensive. We have the engineering talent, management skills, intelligentsia in the form of IAS officers et al and the ability raise funds in the form of bonds or other instruments. Can the ministers and bureaucrats for once, just bring all this to the table and put an action plan in place which is taken to implementation?

As I write this, Mangaluru city is being supplied with water on alternate days. Newspapers quote that the water available in the rivers and reservoirs can last only for 8-10 days. Bureaucracy and the people in power are pointing fingers and blaming one another for inaction, information inaccuracy etc. Water supply cuts could have been instituted much earlier so that we could have avoided reaching such a condition. Did we all now know that the rainfall last year was not sufficient? Supply to construction sites, industries etc should have been regulated as well.

Mangaluru cannot aspire to be a SMART city if we don't plan for basic necessities, isn't it? It is indeed time to WAKE UP and avert future calamities like famines, droughts etc. The fear of what will happen after the water reservoirs run dry gives me the jitters. I hope it is NOT TOO LITTLE, NOT TOO LATE.

By Prashant R Rao, Riyadh/Mangaluru
To submit your article / poem / short story to Daijiworld, please email it to news@daijiworld.com mentioning 'Article/poem submission for daijiworld' in the subject line. Please note the following: