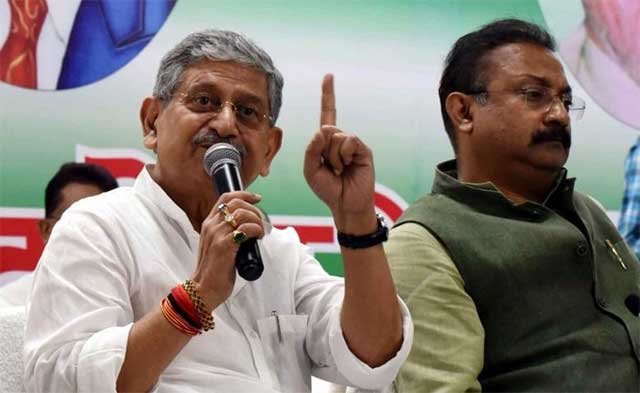 "On Tuesday, our leader Nitish Kumar called a meeting where MLAs have pointed out how the BJP played a negative role against them during the 2020 Assembly election. Many of the JD-U candidates lost the election while they were lucky to win the election in difficult circumstances, the MLAs told the Chief Minister," Lalan Singh added.

"Due to the back-stabbing of the BJP, we fell to 43 seats. After the formation of the government in 2020, the BJP put 'chutbhaiye netas (small-time leaders) forward to give statements against Nitish Kumar and humiliate him. Those chutbhaiye netas used to say that the BJP is an elder brother and the JD-U is the younger brother in the government. I want to tell them that in 2005, the seats of the JD-U were 88, and 118 in 2010. We had 69 seats in 2015 and when we went with the BJP in 2017, we were the bigger party as the BJP had only 53 seats. We never told them that we are the elder brother and the BJP is the junior partner in the government," he said.

He noted that the National Democratic Alliance (NDA) was formed in 1996 "and at that time, respected Atal Bihari Vajpayee, L.K. Advani, Murli Manohar Joshi and George Fernandes were the leaders. The JD-U was associated with NDA for next 17 years and not separated for 17 seconds. The reason was Atal ji, Advani ji, M.M. Joshi ji, and George Sahab were respecting coalition partners. Those leaders had principles to respect the coalition partners.

"And what has happened now... BJP is back-stabbing its coalition partners."

The JD-U chief also said that during the 2019 Lok Sabha election, the BJP was wanting to win the polls and "hence, its leaders did not do mischief".

"When it came to the 2020 Assembly elections, what they did was to backstab us and weaken us," he said.

Hitting out further at the BJP, he said: "At present, the BJP has 303 seats in Lok Sabha including 16 from West Bengal and 17 from Bihar. I firmly believe that the BJP would hardly win a single seat from West Bengal. The situation in Bihar from now on is similar for them as well. The majority level required in Lok Sabha is 272 and if we minus 33 seats from these two states, the BJP will fall below the majority level. Then, we will see how they (BJP leaders) would run a dictatorship in the country."

"At present, there are so many challenges in the country like unemployment and price rise and the BJP is responsible for it. There were 3 lakh youths who passed the physical examinations of the Army in 2019 but the Centre had not given appointment letters. Now, they have come up with an Agniveer scheme to give youth a job of 4 years. A leader of the BJP named (Kailash) Vijayvargiya said they will give jobs of security guards in BJP offices to Agniveers after their retirement. You are forcing youths to become jobless and roam on the streets," Lalan Singh said.

On prospects of ED, CBI, and income tax raids, he asserted that they are not "frightened".

"We are not industrialists. Our source of income is our salaries, rent of our houses and farming. Do whatever they want, we are not afraid of it."

Lalan Singh also defended RJD leader and new Deputy Chief Minister Tejashwi Yadav as well. He said that the charge sheet of the IRCTC scam was filed in 2017 but trial had not started yet. "Why don't they (BJP) start the trial?" he said.

Following recent statements by BJP leaders Sushil Kumar MOdi and Ravi Shankar Prasad, he said that these two leaders "are his good friends".

"Sushil is also a good friend of Nitish Kumar. If these two leaders would get rehabilitated for attacking Chief the Minister, we would not mind it. These two leaders are currently unemployed in the BJP," he said.

"I heard (former JD-U) leader R.C.P. Singh is also saying that Nitish Kumar cheated the BJP. During the 2020 Assembly election, the BJP used Chirag model and this time, R.C.P. Singh. Nitish Kumar trusted him and he was sent to the Rajya Sabha twice. He (Nitish Kumar) also left the national President's post and handed it over to him (Singh) but he played like an agent of BJP to weaken JD-U. Nitish Kumar spotted him and threw out from the party," he added.