Trinamool leaders, who extorted money, being accosted & beaten up: BJP

New Delhi, Aug 10 (IANS): The BJP on Wednesday claimed that the mountains of cash seized from Mamata Banerjee's close aide have enraged West Bengal, and the Trinamool Congress leaders are being accosted and beaten up.

The BJP said the chief minister is also not spared being.Sharing a video, BJP West Bengal co-incharge Amit Malviya tweeted, "TMC leaders, who extorted money, are being accosted and beaten up. It doesn't stop at them. Even the Bengal CM isn't being spared." 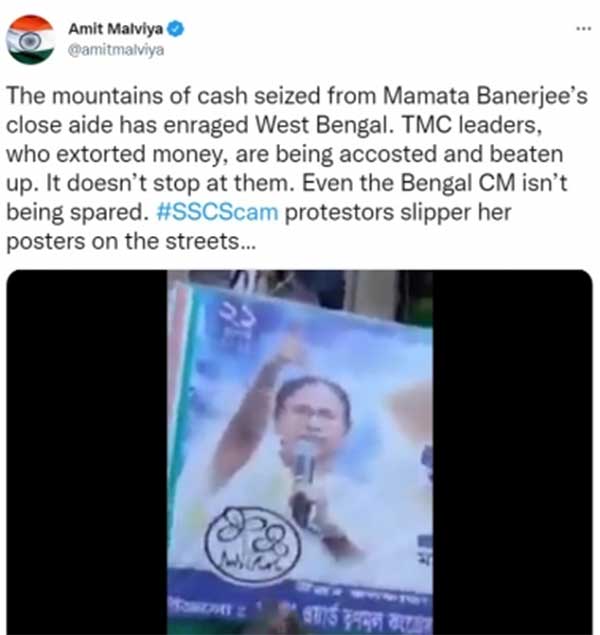 Malviya said that the SSC Scam protesters are now hurling slippers on Chief Minister Banerjee's posters on the streets.

The ED has arrested Partha Chatterjee and his close aide Arpita Mukherjee in the SSC scam and recovered crores in cash, several kilograms of gold, and documents of many properties. Last month, Chatterjee was removed from the state cabinet and the party.

The BJP has intensified its attack on Mamata Banerjee after the arrest of Chatterjee.

Earlier, the BJP had claimed that the Trinamool Congress workers "involved in scams and other illegal activities are worried" after Mamata Banerjee "dumped" Partha Chatterjee.

Malviya had said, "After Mamata Banerjee dumped Partha, her close confidant, every criminal in the Trinamool, from minister to ordinary worker, who are involved in scams, rapes and murders, are worried. They acted on the assurance that Mamata would protect them but now they feel slighted. Law is supreme."