Mangaluru, Aug 6: “To mark the Amrut Mahotsav (75th anniversary of the country's Independence), the Congress has decided to hold a padayatra on Wednesday August 10 at 9.30 am after garlanding Jawaharlal Nehru's statue in Pandeshwar (opposite the old corporation bank). The padayatra will pass through AB Shetty circle, RTO, clock tower, Kodialbail, Besant, and will culminate after garlanding the Mahatma Gandhi's statue in Lalbagh,” said former MLA J R Lobo.

Addressing media here on Saturday August 6, he said, “Over 600 party workers will join the padayatra. People, irrespective of party lines, can take part in this padayatra.” 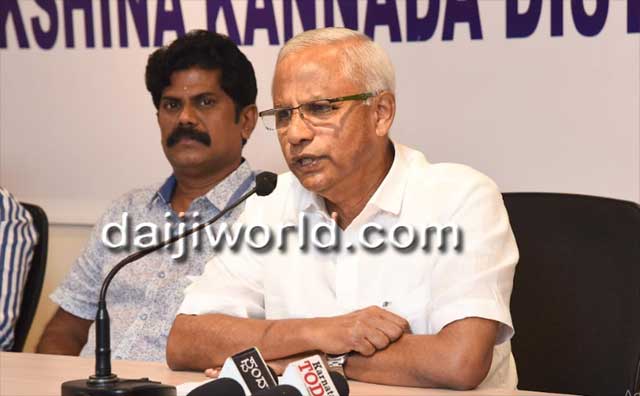 He also said that great leaders like Mahatma Gandhi, Jawaharlal Nehru, Sardar Vallabhbai Patel, Lal Bahadur Shastri, Jagjivan Ram, and others have contributed to the freedom of the nation.

Taking dig at the BJP-led union government, he said, "After Independence, the Congress worked hard to retain the independence, but, at present, dictatorship is growing in the country. Due to the misadministration, the country is heading towards an economic crisis.”

He also said that during the flag hoisting, everyone should follow the flag code and no one should disrespect the flag.

“We have the assurance that the administration will allow us to hold this padayatra. If it does not allow our padayatra, it is like disrespecting the country,” Lobo said.