Mumbai, Jun 26 (IANS): With the ongoing political crisis in Maharashtra worsening, the ruling ally Nationalist Congress Party (NCP) on Saturday demanded to know who is picking up the flights and hotels bills of the rebel Shiv Sena MLAs, currently camping in Guwahati.

NCP chief spokesperson Mahesh Tapase has called upon the Income Tax Department and Enforcement Directorate to probe the source of what he terms as 'black money'. 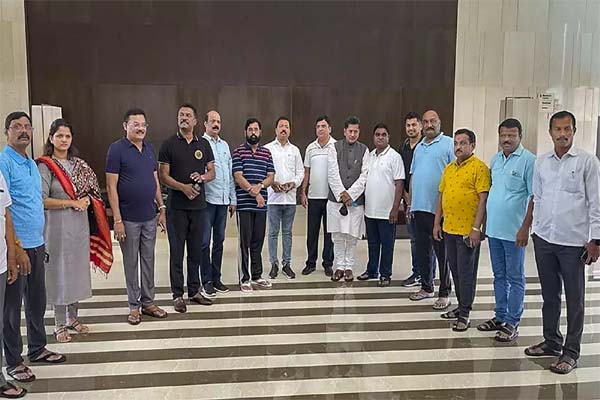 "Who is footing the bills of the hotels in Surat (Gujarat) and Guwahati (Assam) as well as the chartered flights?" asked Tapase.

"Therefore, is this statement an answer to the following questions? Who took the MLAs to Surat? Who flew them to Assam? Who is paying their hotel bills in Guwahati?" questioned Crasto.

However, the rebel group's spokesperson Deepak Kesarkar said in Guwahati on Saturday evening that the Opposition Bharatiya Janata Party (BJP) is not behind the rebellion, nor is any party picking up their tabs but indicated that the MLAs are paying their own bills.

It may be recalled that on the night of June 20-21, the Sena MLAs sneaked out of the celebrations post-MLC elections giving innocuous excuses, somehow managed to discard their police security and became 'unreachable'.

By dawn on Monday (June 21) it became clear that there was a major rebellion in the Maha Vikas Aghadi ally Shiv Sena, led by Chief Minister Uddhav Thackeray.

The rebels, herded by Minister Eknath Shinde, spent a couple of days at the five-star Le Meridien Hotel in the diamond hub of Surat and later were taken in a chartered aircraft to Guwahati where they are lodged in the five-star Radisson Blu Hotel.

The group of legislators from the Sena, as well as independents and other parties, is chilling out in around 70 rooms at the Guwahati hotel, booked for them at a whopping Rs 1.20 crore for at least a week, where they conduct a series of meetings as the crises boils over in Maharashtra.

At both the cities, the two hotels, the airports and other locations where the MLAs travel singly or in groups, a fleet of vehicles at their disposal, they were provided tight security by central forces as well as local police, allegedly courtesy the two BJP-ruled state governments, according to MVA leaders.

The Trinamool Congress staged protests at the hotel, while the Assam Congress has objected at the Sena MLAs' sojourn in Guwahati.