Bengaluru, Jun 22 (IANS): Prime Minister Narendra Modi's recent Karnataka visit has given a much-needed boost to the ruling BJP government in the state, which has been facing flak over social unrest, textbook revision row and poor infrastructure of Bengaluru city among other issues.

The developments were seen as a set back to the state government which has entered the election year. The opposition party Congress and JD (S) seemed to get momentum as they had launched scathing attacks on BJP in Karnataka. 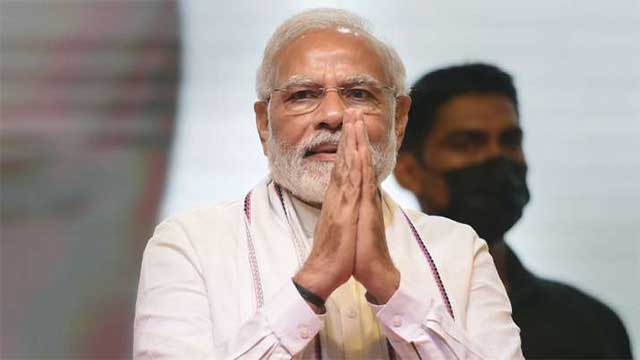 The opposition flayed the BJP over non-decisiveness on the Mekedatu project. After prominent Lingayat and Vokkaliga seers raised their concerns and condemned the textbook revision process, ruling BJP was visibly on back foot.

Prime Minister's whirlwind tour, his assurance to complete the infrastructure development projects in 40 months in Bengaluru, his participation in the 8th International Yoga Day in Mysuru, informal meeting with royal family there, attending a function organised by prominent Linagayat seer Shivarathri Deshikendra Swamiji have helped the party to recover its damage.

Most importantly, the opposition party Congress and JD (S) which accused the ruling BJP of being corrupt, was put to the backseat as PM Modi launched attacks on Congress for delaying the Suburban Rail Project for 40 years. PM Modi stressed that the file was lying unattended for 17 years. The project which was shelved for 40 years would be completed in 40 months, he declared.

Sources in the party explain that opposition parties, especially Congress which has made 40 per cent allegation as its trump card against ruling BJP in state, will now be countered for sleeping on the project for 40 years.

Party heads are also upbeat about the response PM Modi got in the function organised at Suttur Mutt. Most prominent Lingayat seers of the state, Siddalinga Swamiji of Siddaganga Mutt in Tumkur, Shivarathri Deshikendra Swamiji of Suttur Mutt in Mysuru and Siddeshwar Swamiji of Vijaypur known as prominent spiritual guru blessing PM Modi has sent a clear message to masses particularly Lingayat vote bank.

Siddeshwar Swamiji, who is known for his disinterestedness in politics, showered praises on PM Modi. Swamiji had written a letter to PM Modi refusing to accept the Padma Shri award which was conferred upon him. He had also rejected the bounty released to his mutt by the Yediyurappa government.

Swamiji has a huge following of devotees in north Karnataka and southern Maharashtra. Siddeshwar Swamiji showered praises on PM Modi at the event. The sources in the party say that it was very important for the party as former CM B.S. Yediyurappa was seen as the unquestionable leader of Lingayat community till date.

PM Modi specially greeted former Chief Minister B.S. Yediyurappa sent out a signal that he is respected and honored in the party.

Yediyurappa was at the Yelahanka Indian Air Force Base to welcome PM Modi along with the Governor Thawar Chand Ghehlot, Chief Minister Basavaraj Bommai and Union Minister for Coal, Mining and Parliamentary Affairs Pralhad Joshi.

After being received by the Governor and CM Bommai, Yediyurappa greeted and welcomed PM Modi. At this point PM Modi held Yediyurappa's hand and spoke to him for about 5 minutes.

The rumors of Yediyurappa being sidelined by central leadership were strongly circulated in the state. Yediyurappa had failed to obtain an MLC ticket for his son and to the much chagrin of BJP leadership, announced later that his son would contest upcoming Assembly polls.

However, the presence of Yediyurappa with the CM Bommai to receive PM Modi and later PM Modi talking to him warmly has given a message to party insiders who are running a campaign against Yediyurappa that high command has dumped him already, according to sources in the party.

Vivek Reddy, BJP spokesperson and President of Advocates' Association, Bengaluru told IANS that the visit has galvanised the party in the state. "PM Modi is a big force in the party. Secondly, the response in the state shows he has won the hearts of people. His credibility in the public eye is unparalleled in history of India," he says.

This PM has special status in masses, more because of developmental agenda and his dedication to put the Indian nation on the global map. Much of state politics will take the aspirational and vision direction of PM Modi, says Vivek Reddy.

H.D. Kumaraswamy, former CM of Karnataka stated that the Suburban Rail Project for Bengaluru was envisioned during his term and PM Modi is getting publicity for this project. He also chided that BJP is claiming that PM Modi has given green signal to Rs 33,000 crore worth development projects in the state. BJP leaders should explain whether PM Modi started these projects or the projects were formulated by the previous governments.