The imposing model of the erstwhile Vikrant was created in-house by the Naval Dockyard here and has been stationed at a small traffic island in association with the Colaba Residents Association, My Dream Colaba and CALM, supported by lawyer Makarand Narvekar. 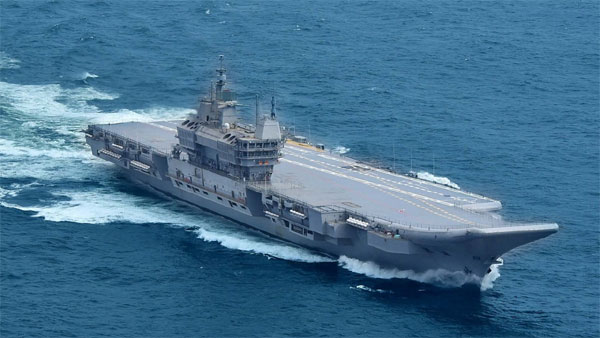 An aircraft carrier of the Majestic Class, INS Vikrant was launched in September 1945 for the British Royal Navy and the 210 metre-long vessel formally inducted into the Indian Navy on November 3, 1961.

She was decommissioned in January 1997 after a glorious service of 36 years, and served as a floating museum ship anchored off Cuffe Parade till 2012 amid a nationwide clamour to convert her into a permanent museum.

After a series of developments, including campaigns, processions, protests and legal battles, Vikrant was finally sold through an online auction and scrapped in November 2014, marking the end of an emotional era.

During her heyday as INS Vikrant prowling in the oceans, she participated in numerous campaigns and exercises including the Liberation of Goa in December 1961 and the India-Pakistan War in 1971, among many others.

The dedication in Mumbai of the Vikrant model is an affirmation of the strong maritime connect of the coastal city and the rich maritime heritage of Maharashtra which has a long coastline.

The Vikrant model stands close to the iconic Gateway of India and Naval Dockyard, signifying the ship's bonds with Mumbai where she was based during her entire commissioned service.

In tune with the old adage, 'Old ships never die, they fade away to be resurrected in another avatar', 'Vikrant' is set for rebirth as an Indigenous Aircraft Carrier designed by Indian Navy and under construction at the Cochin Shipyard Ltd.

The new avatar of Vikrant is currently undergoing sea trials and will soon be commissioned into the Indian Navy as 'INS Vikrant', said officials.