Rajkot, May 28 (IANS): Prime Minister Narendra Modi, keeping the election year in mind, smartly played Mahatma Gandhi's Swadeshi card, reminding how the Sardar Sarovar project was completed against all odds. He was in Rajkot on Saturday to inaugurate a hospital.

Modi said that before 2001, Gujarat had not seen development and growth, but it was due to his initiative, the state has now developed in education, industries, and infrastructure. 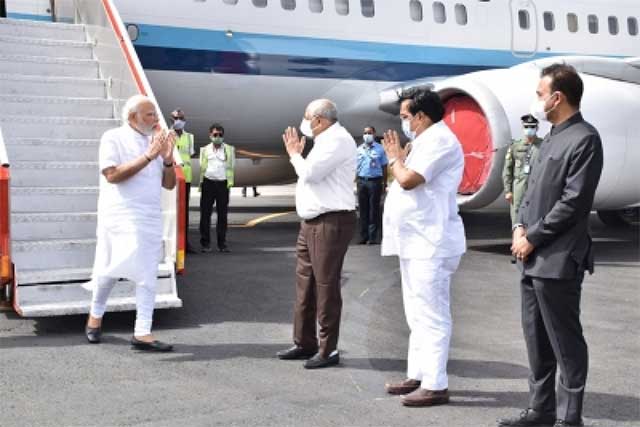 Playing the regional card, Modi said his government abides by Mahatma Gandhi's Swadeshi ideology and so is implementing Swadeshi Arth-niti. Gandhi and Patel were always concerned about the upliftment of the poor, and this is the cause upheld by the Modi government. Reaching out to locals, he addressed in Gujarati.

The Prime Minister inaugurated the 200-bed K.D. Parvadia hospital at Atkot in Rajkot district of Saurashtra region. The superspeciality hospital is developed with an investment of Rs 40 crore. The facility was established by the Leuva Patidar leader, BJP's Bharat Boghra and his family. Boghra is vice president of BJP's Gujarat unit.

Speaking at the event, the Prime Minister said that before 2001, there were just nine Medical colleges with 1100 seats, but in 21 years, the state has 30 medical colleges with 8000 seats. The government targets one medical college in every district so that no poor family's child dreaming to be a doctor is disappointed due to unavailability of seats.

Without naming the Congress rule, he criticised that in past, industrial development was limited between Vapi and Vadodara and pharma sector remained in just one or two districts. He added that the previous governments never focused on expanding trade, businesses and industries, which his government did.

He even alleged that when he was Chief Minister, Gujarat's projects were not cleared by the (Congress-led) Centre, and that Congress was anti-Gujarat.

During his tenure as Prime Minister, three crore poor families were allotted pakka ghar, 10 crore got toilets, nine crore women were given gas cylinders, and 2.50 crore houses got electrification.

It was further enumerated that during the Pandemic, Modi government gave free ration to the socially and economically backward groups, giving them a dignified life - something no other government had ever done.