Sri Lanka, out of lifesaving drugs, receives consignment from India

Colombo, May 28 (IANS): Sri Lanka's medical system, ailing with the shortage of over 270 drugs including some life-saving medicines, received a boost on Friday with the receipt of a 25 ton consignment of drugs valued at SLR 260 million.

and other medical supplies donated by the Indian government to Health Minister Keheliya Rambukwella in Colombo. 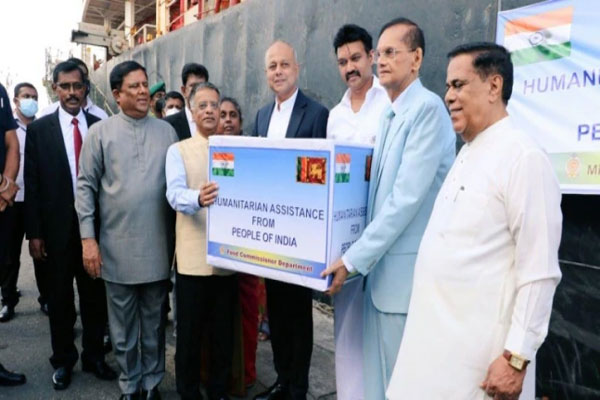 "Indian Naval Ship (INS) Gharial, a 5600 tons Landing Ship was deployed for the delivery of humanitarian assistance materials expeditiously as part of Mission SAGAR IX," the High Commission said in a statement.

The medical consignment was donated in response to requests made by various organisations and hospitals spread across different parts of the country, it said.

"Another large consignment of medical supplies for use by Teaching Hospital, Peradeniya was earlier delivered on board INS Gharial on April 29, 2022. These humanitarian supplies are in continuation of Government of India's ongoing support to the people of Sri Lanka in multiple forms such as financial assistance, forex support, material supply etc. These efforts testify Prime Minister Narendra Modi's 'Neighbourhood First' policy which places people-to-people engagement at its core.

Faced with dollar crunch early this year, Sri Lanka, which was delaying opening of letters of credit (LoC) to import medicines and medical equipment, used India's $1 billion credit line to open LoCs to purchase medicine among other essential items.

Since January, the Indian Ocean island nation's closest neighbour has assisted it with over $3.5 billion financial support.

"I had a conversation with India's Minister of Finance @nsitharaman today. I expressed our country's appreciation for the support India has extended during this difficult period. I look forward to further strengthening ties between our nations," Prime Minister Ranil Wickremesighe tweeted on Friday night.

"Assistance from India and Japan: I am grateful for the positive response from India and Japan on the proposal made for the Quad members (United States, India, Japan, and Australia) to take the lead in setting up a foreign aid consortium to assist Sri Lanka," the PM tweeted.