New Delhi, May 27 (IANS): Union Women and Child Development Minister Smriti Irani on Friday slammed the Gandhi family while speaking at the BJP's 'Tridev Sammelan' held in the city of Kangra in Himachal Pradesh.

She said the chants of 'Shri Ram' must reverberate with the Gandhi family in Delhi, Amethi and Kerala from the hill state. 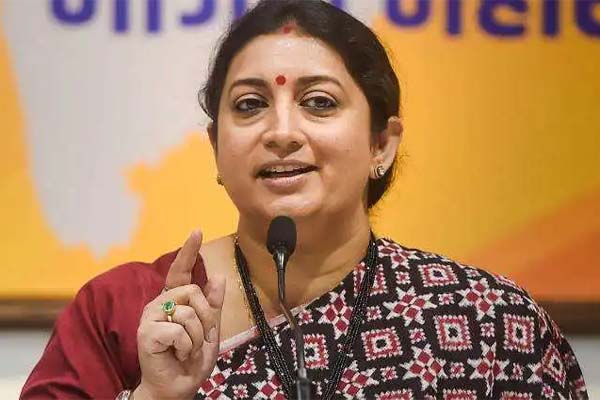 This statement by Irani comes ahead of the BJP's aim of 'Mission repeat' in the upcoming Himachal Pradesh Assembly election and galvanise the party workers.

Smriti Irani said the 'Tridevs' (Booth Adhyaksh, Booth Palak and Booth Agent) are the biggest strength of the party organisation, adding that it is their hard work which has helped the BJP emerge as the party with the largest party workers in the country and the world.

The Union Minister raised the slogan of 'Shri Ram' while praising the 'Tridevs', saying that today there are BJP governments in most of the states of the country only due to their contribution.

Smriti Irani said the BJP government will come back to power in Himachal Pradesh and the party workers at the ground level have contributed towards strengthening the party organisation.

Attacking the Nehru-Gandhi family, she added that the former delayed the construction of the Ram temple at Ayodhya for decades while being in power.

"It is the same Gandhi family which is working to disturb the peace in the country."

Smriti Irani objected to Rahul Gandhi's recent statement about other democracies, saying that the Gandhi family never had faith in India's democracy and have always believed in dividing the country.

Referring to the military credentials of Himachal Pradesh, Irani said that Himachal Pradesh is the 'City of Gods' where the Indian Army received the Param Vir Chakra for the first time in the country.

The valiant people of Himachal Pradesh will show the door to those parties which disrespect the armed forces.

Parties such as the Congress which are involved in anti-national activities will be rejected by the people of Himachal Pradesh.