Fadnavis launched a blistering, no-holds-barred attack at Pawar, ranging from the Constitution to the mafia to 'The Kashmir Files' and the man who coined the word 'Hindu terror' -- though the immediate political provocation for the loaded verbal assault was not clear. 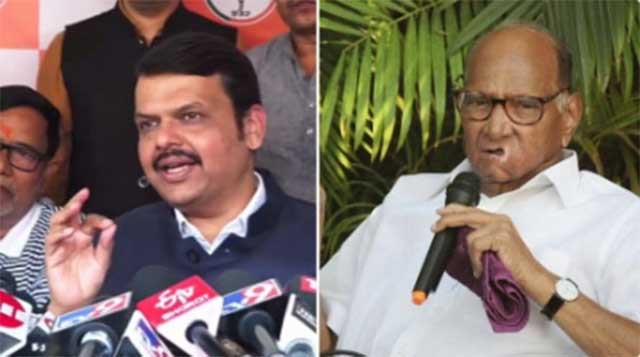 Among other things, Fadnavis endorsed Maharashtra Navnirman Sena chief Raj Thackeray's charges against Pawar of appeasing minorities and polarising the society on communal lines -- a day after the 81-year-old NCP chief rebuked Thackeray for his 'childish' outbursts on Tuesday against the Pawars and others.

"On one hand, we are celebrating (today, 131st) birth anniversary of Dr. B.R. Ambedkarji, who was against inclusion of Article 370 granting special status to Jammu & Kashmir. But look what is being said going against the wishes and values of Dr. Ambedkarji," posted Fadnavis.

Talking of Pawar's statements on the film 'The Kashmir Files', Fadnavis said they were not surprising as they were in tune with the NCP's decades old track record of appeasement politics and polarising the society on communal lines.

Fadnavis also pointed out that NCP minister Nawab Malik was arrested by the Enforcement Director for activities linked to alleged money-laundering of absconding mafia don Dawood Ibrahim Kaskar, while in 2013, the NCP was on record declaring Ishrat Jahan as innocent, with its senior leaders extending help to her and even trying to demean the Intelligence Bureau though they were themselves in power at that time.

In a brief reaction, NCP's Home Minister Dilip Walse-Patil said that even in the past, Sharad Pawar was linked to the mafia and said it has become a favourite hobby of people to target the NCP chief.

Fadnavis said in 2012, when the Congress-NCP ruled the state, the 'shameful' Azad Maidan violence took place in Mumbai, and the Amar Jawan Jyoti was desecrated, but the NCP, which held the home portfolio, went soft on the Raza Academy and instead removed the Mumbai Police Commissioner.

Going back by three decades, Fadnavis asked what happened when Mumbai cried during the 12 serial blasts of March 12, 1993 that shook the city, but Pawar 'invented' a 13th blast in a Muslim area, and instead of law and order, appeasement was his first priority.

The BJP leader said the NCP has 'grand' plans to introduce Muslim quota in Maharashtra though the Constitution has no such provision, adding that it is "shameful how vote-bank politics prevails over Constitutional values".

Defending 'The Kashmir Files', Fadnavis said the movie is not against any religion but against those who chose to look the other way when people were suffering, because they felt that it suited their 'political agenda of appeasement, thereby achieving a communal divide', but such acts and approach of disturbing 'the harmony of society cannot be accepted by Ambedkar's India.'

Referring to Pawar, Fadnavis asked 'any guess on who was the first person' to coin the term 'Hindu Terror', and a gem - 'Minorities decide whom to defeat' - and wondered whether such utterances have any place in our polity.