Karwar: Groom out to desert bride because she eats with left hand

Karwar, Mar 13: In a strange incident which happened in Lord Shiva temple in Kolagi in Dandeli, the groom was about to disown his newly married bride and go back home alone. And the reason was, he found out that his bride eats with her left hand.

The families had agreed to perform the wedding of Kathu Naik from Joida with a girl from Yellapur, a couple of days ago. The marriage went on well and at the end, arrangements had been made for the newlyweds to have food together. At that time, the groom noticed that the girl ate with her left hand. He found it awkward and unacceptable and his family supported his decision to leave the bride alone and return to their native place. 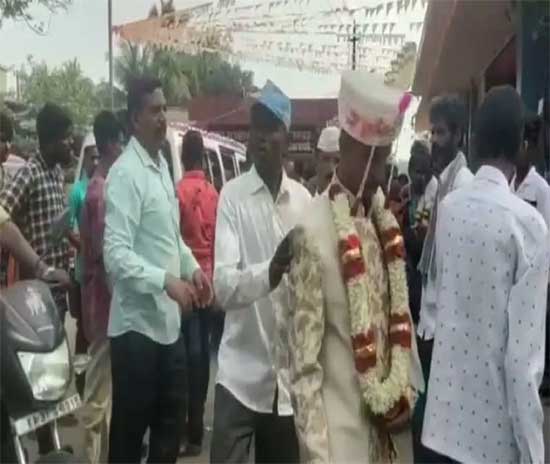 At this point, the parents of the girl stopped them and requested to settle misunderstandings if any through mutual discussions. The girl is differently abled, and the marriage was agreed upon just a few days back. Since the boy's side had kicked up a quarrel, the girl's relatives were really worried. As the groom's relatives remained stubborn, the girl's parents called 112 helpline. The police along with the lady staff of the centre arrived at the venue of the marriage and convinced the groom and his parents. The two sides were taken to a counselling centre where the groom was advised and convinced to carry on with his newlywed. No case was registered relating to this incident.

Title: Karwar: Groom out to desert bride because she eats with left hand