New Delhi, Jan 22 (IANS): After over a month since the farmer protests against the three contentious farm laws across various borders of the nationl capital was called off, a man from Haryana has chosen a unique way of protest against the Union government by printing 1500 marriage cards two weeks before his marriage, demanding a law guaranteeing Minimum Support Price (MSP) on the crop produce.

Pradeep Kaliramana, a resident of Haryana's Bhiwani district, is getting married on February 14. He has printed 1500 wedding cards in which it is written, "Jang Abhi Jaari Hai, MSP Ki Baari Hai (which means "The battle is still on, it's MSP's turn"). Apart from this, a signboard depicting a 'tractor' and 'No Farmers, No Food' have also been displayed on the marriage cards. 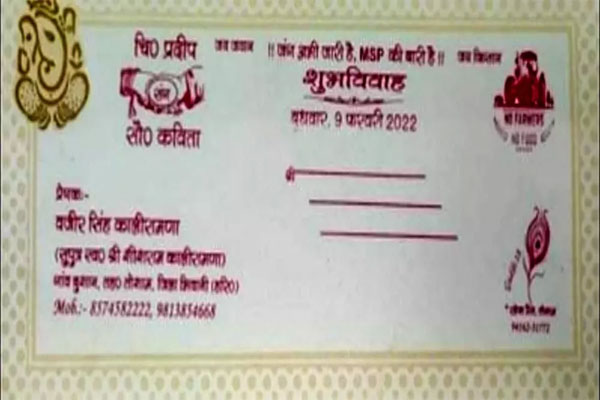 Pradeep told IANS, "I want to send a message through my wedding card that the victory of the farmers' protest is not yet complete. The victory of the farmers will be declared only when the Union government will give it in writing to the farmers guaranteeing a law under the MSP Act. Without the law on MSP, farmers have nothing and the martyrdom of farmers and their sacrifices will also be fulfilled only if there is a legal gurantee on the MSP."

He said, "During the farmer protests, he visited the borders of Delhi and also extended his support to all other farmers sitting at various protest sites. This is the reason I got printed 1500 wedding cards demanding legal guarantee on MSP."

On June 5, 2020, the Central government had tabled the three contentious farm bills on the floor of the Parliament. On September 20, the three laws were passed in Lok Sabha followed by the Rajya Sabha.

The farmers' protest against the three central farms laws lasted for nearly 13 months following which the Central government withdrew the laws after which the government agreed to several other demands raised by the farmers.