Eye on Polls: BJP trying to win support of Muslim women beneficiaries of govt schemes in UP

New Delhi, Jan 22 (IANS): In an attempt to make inroads into the minority vote bank in poll-bound Uttar Pradesh, the BJP is trying to win the support of Muslim women.

The saffron party is reaching out to Muslim women who benefitted from the Narendra Modi's government welfare schemes along with decision to ban the practice of instant triple talaq.

Muslims constitute little less than 20 per cent of Uttar Pradesh's total population while other minorities form around 1 per cent of the state's population. 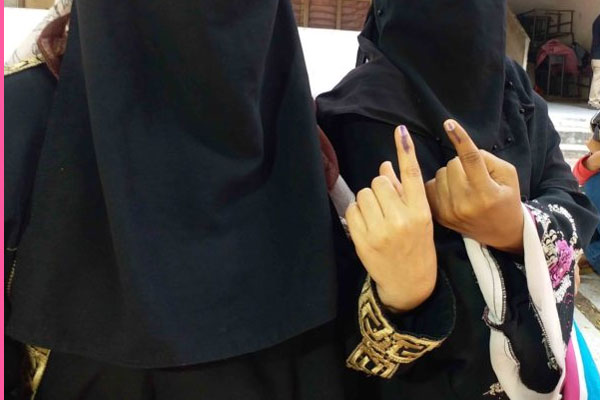 BJP Minority Morcha national media in-charge, Syed Yasir Jilani, told IANS that Muslim women who benefitted from the welfare schemes of the Modi government are coming out in support of the BJP and the Prime Minister.

Jilani, who is helping the local unit in Sambhal district along with other party leaders from the national capital, claimed that Muslim women are listing a series of government initiatives which have benefitted them.

"Muslim women are defying their male family members and supporting Prime Minister Modi and the BJP. They are saying that their family benefitted from PM Awas Yojna, PM Garib Kalyan Anna Yojana, which provided free ration, Ujjwala Yojana and other beneficiary schemes of the Centre. These women are openly supporting Modi. They are also thanking the Prime Minister for banning instant triple talaq," Jilani claimed.

To convert the support of the Muslim women into votes, the BJP Minority Morcha is now planning to reach out to these women in small groups of four to five workers. The BJP workers will explain to these women the benefits of government schemes, initiated both by the Centre and the Yogi Adityanath government in Uttar Pradesh.

"We also explain how our political rivals are misleading them by creating a fear in the community about the BJP," he said.

Title: Eye on Polls: BJP trying to win support of Muslim women beneficiaries of govt schemes in UP