Singh was elected to the Manipur assembly in 2017 elections from Thanga assembly seat in Bishnupur district. Surchandra, a former IAS officer, was elected from Kakching constituency in 2017 on Congress ticket but Manipur High Court subsequently declared his election as null and void over non-disclosure of information in the election affidavit. 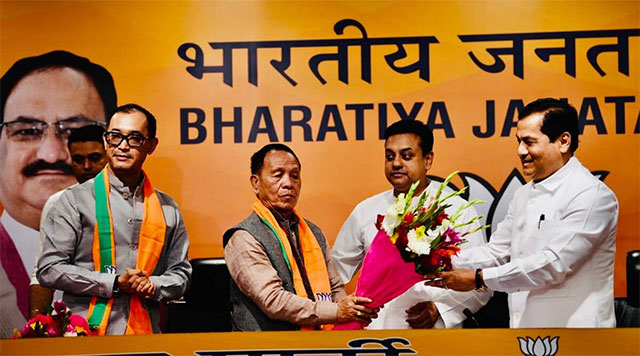 Central Minister Pratima Bhowmik and Assam Minister Ashok Singhal, both are BJP's in-charges for the Manipur elections, welcomed both Singh and Surchandra at a simple function in Imphal.

Bhowmik later tweeted: "I welcome Shri T. Robindro Singh, MLA of Thanga to the BJP Parivar. The BJP Manipur is going from strength to strength due to people's belief in the leadership of PM Shri Narendra Modi ji and the great work being done by CM Shri N. Biren Singh ji in the state."

After 15 years, the Congress, despite emerging as the single-largest party with 28 seats, was ousted by the BJP-led alliance in the 2017 Assembly polls.

The saffron party, which had bagged 21 seats, stitched together a coalition government with the support of four National People's Party (NPP) MLAs, as many Naga People's Front (NPF) members, the lone Trinamool Congress MLA and an Independent member.

The elections to the 60-member Manipur assembly would be held in two phases on February 27 and March 3. The counting of votes will take place on March 10.