Udupi, Dec 26: BJP's firebrand MP Tejasvi Surya on Saturday December 25 said that the work of preventing religious conversion and bringing back those who had converted from Hinduism to other religions should happen on 'war-footing'.

Surya was speaking at the Vishwarpanam programme that was held at Rajangana of Sri Krishna Math on Saturday.

Surya said that those who got converted to Islam and went to Pakistan should be brought back to Hinduism. He also said that there is 'no way out' other than doing Ghar Wapsi. 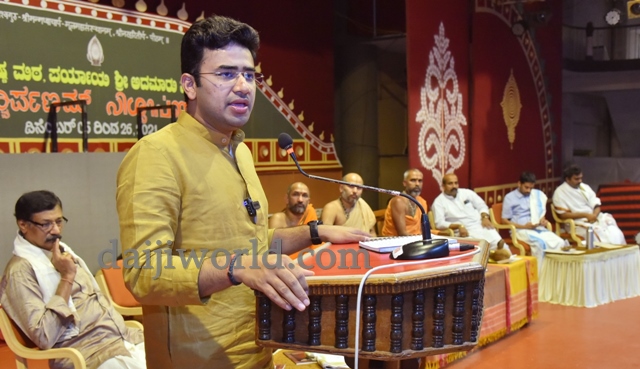 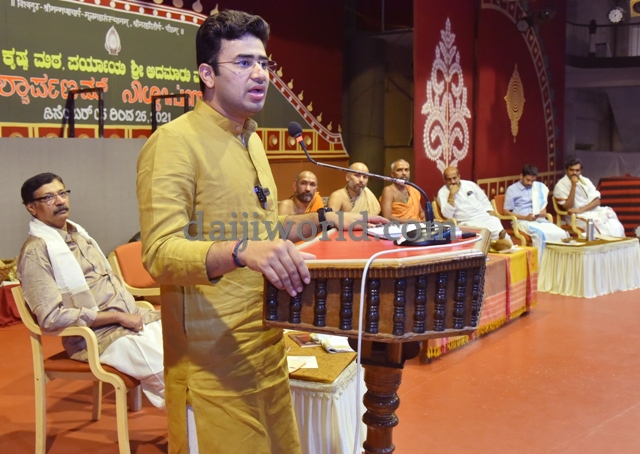 "Due to the sword of Tipu many religious conversions have taken place. Nothing is impossible. We should start Ghar Wapsi in our nearby villages and towns. We should nurture big dreams of making this a Hindu country.

“We have built Ram Mandir in this country. Article 370 of Jammu and Kashmir is done away with. We should convert the Muslims of Pakistan to Hinduism. We have to prioritise Ghar wapsi. Pakistan is included in the idea of Akhanda Bharath. Maths and temples should take leadership in this regard.

"In India, the followers of Sanatana culture do not know the fundamental differences between their religion and other religions. Others propagated their faith by weilding swords. Theirs is a religion that has a political background. That is why ancient civilizations of Rome and Greece got destroyed in only a few centuries. Though India has faced many more invasions than them, the root culture is still alive as we fought the invaders with courage and grit.

"Communism, colonialism and Macaulayism are the reasons for Hinduism becoming weak. Have those, who are urging to celebrate Tipu Jayanti, urged to celebrate Kalam Jayanti or Shishunala Sharifa Jayanti? This is the difference.

"We want hospitals, educational institutions, air travel and bus travel managed by private entities. Why should there be a government only for God? Don’t those who manage companies like Microsoft, run temples? Does scam not take place in religious sectors of other religions? Government has walked out of the administration of temples in Uttarakhand. This should happen in other states also. Caste discrimination should be eradicated," he said.