Sharing the video, BJP MLA M.P. Renukacharya has taunted the Congress party on how it showed respect to the tall leader of their own party. 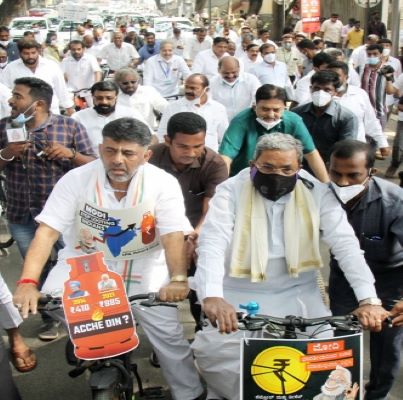 The video was recorded on October 31, at a function in Congress party office to mark the death anniversary of Indira Gandhi. All state top Congress leaders attended the function.

In the video, Siddaramaiah is seen whispering to Shivakumar that it is also the birth anniversary of Sardar Patel and his portrait should also be there.

Shivakumar, though says it is not possible, finally agrees and orders party workers to place the photograph of Sardar Patel along with Indira Gandhi after Siddaramaiah tells him that BJP will take advantage.

The conversation between the two leaders got picked up by the media mics. BJP MLA Renukacharya has posted it on his social media and questioned Congress leaders' morality on respecting national leaders.

However, the Congress party leaders have ignored it and some maintained that they need not answer trivial charges by a person like Renukacharya.