Udupi, Oct 18: Union minister of state for fisheries, animal husbandry, dairying as well as information and broadcasting, Dr Loganathan Murugan, said that the centre will soon implement a plan under which villages predominantly inhabited by fishermen are proposed to be developed by sanctioning a grant of Rs7.5 crore.

He was speaking after visiting Malpe port and interacting with the fishermen there.

The minister stated that the central government will grant the said fund to undertake works which are meant to provide basic facilities, fisheries activities and academic activities for the children. He said that the work of identifying the fisheries villages will begin soon. "In Karnataka, the central government will invest Rs 725 crore in the next five years to develop fisheries activities. Approval has already been granted for building a port at Hejamady. A plan to enable fisherwomen to undertake cultivation of seaweed has been drafted and this scheme is meant to provide them financial stability," he explained. 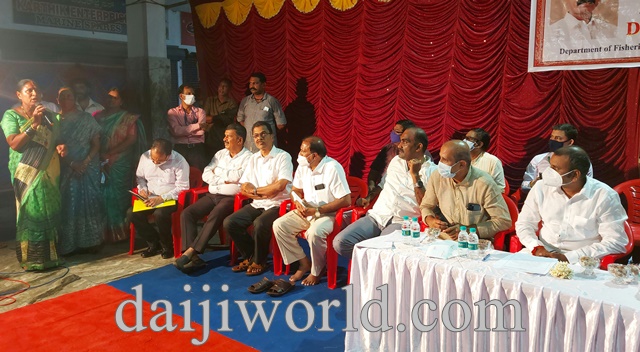 Udupi MLA Raghupati Bhat, said that the fisheries sector currently is facing multifarious problems and sought reduction in the taxes on the diesel given to the fishermen by the central government. He also sought kerosene for country boats, solution to the dredging problem, and sought exemption for the boats from road cess. He also wanted inter-state problems fishermen face at sea and to extend diesel subsidy currently being extended to fishermen holding BPL cards, also to all other fishermen.