Nagpur (Maharashtra), Oct 16 (IANS): In a stinging counter-attack at Maharashtra Chief Minister Uddhav Thackeray, Leader of Opposition Devendra Fadnavis once again labelled the MVA government as the "most corrupt" in the state's history, here on Saturday.

Rubbishing Thackeray's statements on Friday night that the BJP was misusing central agencies like ED, IT, CBI to target the non-BJP ruled states, Fadnavis defended the Centre, saying it was not doing so.

"If indeed the Centre had really misused the probe agencies, then half the MVA cabinet ministers would have been in jail. The parties like Congress are scared because PM Narendra Modiji will not rest till he uproots corruption in the country," Fadnavis asserted. 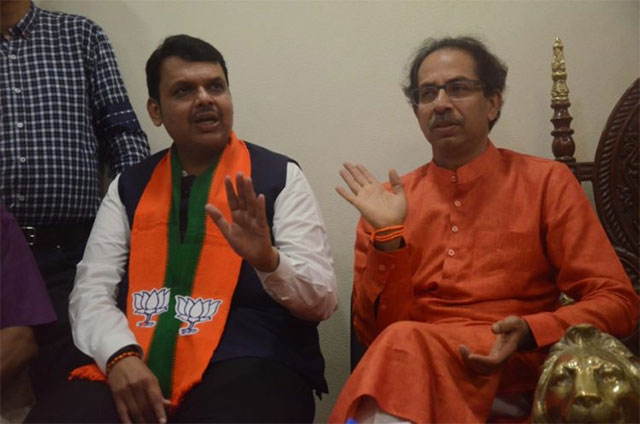 Alleging that massive 'dalali' (middlemen deals) are going on, Fadnavis declared that as long as corruption exists in the state, the central agencies would keep coming here.

The BJP leader also alleged that the MVA ministers are having a 'software' for indulging in 'vasuli' (extortion), and other corrupt activities are going on in full swing in the state.

On the CM's call to his party workers to "learn from West Bengal", Fadnavis asked whether the CM wanted to make Maharashtra a "lawless state" like West Bengal, and said the BJP would fight it tooth-and-nail.

Slamming the CM's challenge to the BJP to "topple the MVA government", Fadnavis said that the CM was speaking only out of 'sheer frustration', and claimed the BJP is not interested in bringing down the government which would collapse on its own.

Rejecting Thackeray's charges, Fadnavis reiterated that the Shiv Sena had betrayed the people's mandate in the 2019 assembly elections by allying with the Nationalist Congress Party-Congress to form the MVA government, in the name of fulfilling the promise made to the late Balasaheb Thackeray to have a Shiv Sainik as the CM.

"If you were so keen to make a Sainik the CM, then why did you bypass all other senior leaders in your party? It was always your personal ambition to become the CM - nothing wrong in this - but at least drop this mask now," Fadnavis said.