Killing of civilians in Kashmir: Is there a bigger plot behind terror acts?

New Delhi, Oct 10: The recent killings of civilians in Kashmir are a grim reminder for the minorities that they continue to be easy targets for the terrorists. Reminiscent of the late 80s and 90s, the terrorists and their schemers are again indulging in targeted killings. Earlier, it had led to the exodus of lakhs of people and this time it is meant to be a direct challenge to the 'Naya Kashmir' plans of the Modi-led Union government.

The 'Naya Kashmir' project involves rebuilding the Valley, opening it for the country and world, and resettling the displaced Kashmiri Pandits (KPs). As part of resettling of the KPs, the Centre has taken several measures, like providing jobs for the KP youth under the PM Package, building housing societies for those who take up the jobs, launching a website for easy access to get the domicile certificates and lately launching the migrants' distress sales portal (http://jkmigrantrelief.nic.in). 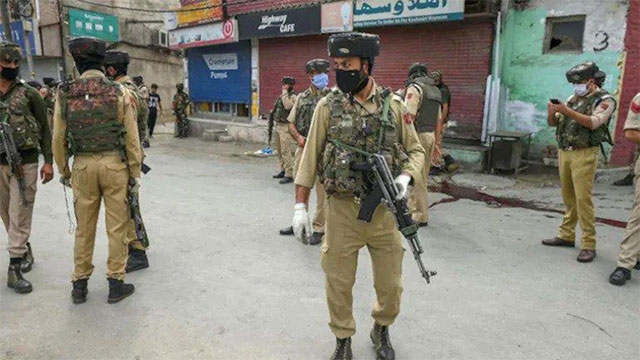 The portal launched by Jammu and Kashmir Lieutenant Governor Manoj Sinha on September 7 provides a platform for Kashmiri migrants, the KPs in particular, to file complaints for immovable properties which were encroached upon or ones that were disposed of in distress sales in the 1990s. The LG said that during the trial run of the portal, they received 854 grievances, which showed that a large number of the migrant families were awaiting justice.

While the steps being taken by the government to redress the migrants' concerns are being welcomed, several minority organisations within and outside the Valley have expressed fear of being attacked in retribution. Satish Mahaldar, Chairman, Reconciliation, Return & Rehabilitations of Migrants said, "We, had already intimated to the Government of India several times through media and otherwise that the launch of Migrant Distress Sales Portal will trigger an anti-minority feeling in some quarters, especially the land mafia."

Despite being a terror affected state, land prices in the Valley are skyrocketing. A plot of land that cost around Rs 20 lakh/kanal in the KP-dominated area of Habba Kadal in Srinagar in the 1990s, now costs over Rs one crore/kanal. A majority of the migrant Kashmiri Pandits out of distress or perforce had sold off their properties for whatever prices they got. Now, after the launch of the portal, an increasing number of KPs are mulling to file complaints. And, it is this that is not acceptable to those who have either bought, usurped or encroached lands and houses belonging to the migrants.

What precedes this launch of the portal is an Act, called the Jammu and Kashmir Migrant Immovable Property (Preservation, Protection and Restraint on Distress Sales) Act, 1997. It aims to protect properties of migrants "who had migrated from Kashmir Valley or any other part of the State after November 1, 1989 and is registered as such with the Relief Commissioner... and is possessed of immovable property... at the place from where he has migrated... but is unable to ordinarily reside there due to the disturbed conditions". However, the Act's effectiveness has been under question.

The Jammu & Kashmir High Court at Srinagar had ordered in a case dated May 13, 2011 that the property of a temple should be preserved and protected from encroachments and illegal transfers. The court, in its order, also specified that no construction should be permitted on the temple properties which had been transferred to the private parties through various deeds executed by the parties.

Despite the Act and the HC orders, many of the migrant private and community properties were sold. Over the years these migrant properties were sold multiple times and new houses, malls and shopping complexes have come up in their place. Now that the migrants have started expressing themselves on the official portal, all the sale deeds done by the administration could come under a cloud.

After the abrogation of Article 370, and the downward trend in civilian killings, stone pelting and bomb attacks, migrants had been planning to return to the Valley and reclaiming their properties valued in crores of rupees now.

Of late, videos of temples opening, KP families praying and singing in their homes, processions being taken through Srinagar streets on Janmashtami have gone viral in the Valley. Many within the KP community felt it was perhaps time to go back. As per the Centre's data, after the abrogation of Article 370, a total of 520 migrants have returned to take up the jobs. A few thousand are said to be living in Kashmir.

The recent spate of violence began on October 2, when Gandhi Jayanti was being observed. A temple was desecrated in Jammu and Kashmir's Anantnag district -- Bargheshekha Bhagwati Mata Temple in the Mattan area. On October 5, Makhan Lal Bindroo was shot dead in his shop in Srinagar and two days later a Sikh woman principal and a KP teacher were killed inside the school premises. Earlier, a vendor from Bihar Virendra Paswan was shot dead. A terrorist organisation named The Resistance Front took responsibility for all the killings.

These killings have created a sense of fear among the minorities once again. Some employees, who were provided government jobs under a rehabilitation package in 2010-2011, have started moving to Jammu. The Sikh community took out a protest funeral procession of the slain principal and staged a dharna at the secretariat in Srinagar seeking death for the TRF.

Title: Killing of civilians in Kashmir: Is there a bigger plot behind terror acts?