New Delhi, Feb 11 (IANS): The Aam Aadmi Party swept the Delhi Assembly polls with 62 seats, five less than in 2015, as per the final results announced by the Election Commission on Tuesday night.

The opposition BJP got eight seats, up from three in 2015, while the Congress remained at zero.

The victory of the AAP ensured a hat-trick for its national convener Arvind Kejriwal in the office of Delhi Chief Minister. All the Kejriwal government ministers retained their seats with a decent margin, though Deputy Chief Minister Manish Sisodia saw a see-saw battle before he was declared winner from his Patparganj seat in east Delhi. 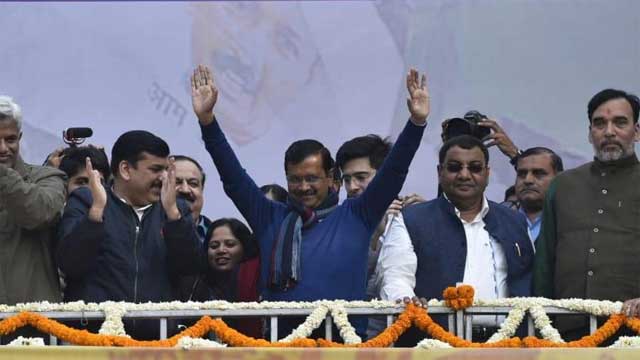 Kejriwal is the second person after Congress leader Sheila Dikshit to become the Chief Minister of the city for the third time.

The AAP had won 67 of the 70 Assembly seats in 2015, barring Rohini, Vishwas Nagar and Mustafabad which had gone to the BJP's kitty.

This time, the BJP lost Mustafabad but retained Rohini and Vishwas Nagar, and also went on to win Gandhi Nagar, Ghonda, Karawal Nagar, Laxmi Nagar and Rohtas Nagar and Badarpur.

The Congress continues to be on zero, and also saw its vote share go down from that in 2015.

In the 2013 Assembly polls, while the Congress had secured a vote share of 24.55 per cent, the BJP had secured 33.07 per cent vote share and the AAP, which was contesting for the first time, had secured 29.49 per cent.

The AAP and the Congress joined hands to form Arvind Kejriwal's 49-day government.

The Aam Aadmi Party had changed the political picture of Delhi since its formation in 2012. While the assembly polls before 2012 were between the Congress and the BJP, the assembly elections since 2013 had been all about AAP in Delhi.

The BJP got its highest vote share in the first-ever Delhi Assembly polls in 1993 -- 42.82 per cent votes -- and had formed a government. The vote share of Congress was 34.48 per cent during that time. 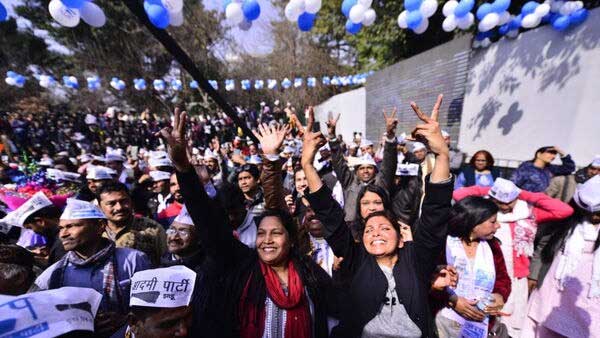 New Delhi, Feb 11: Arvind Kejriwal’s Aam Aadmi Party (AAP) will eye a third consecutive term in power in Delhi as the Election Commission starts counting of votes at 8am after a three-cornered poll contest that saw it battle the Bharatiya Janata Party (BJP), whose high-pitched campaign was anchored by home minister Amit Shah and not Prime Minister Narendra Modi, and the Congress.

The Delhi Assembly elections result will also determine the AAP’s future and whether Arvind Kejriwal will be able to renew his ambition of making it a national party. All the exit polls have been unanimous that Arvind Kejriwal will return as Delhi chief minister for the third time and the AAP will romp home to victory, at the very least by a two-thirds majority. 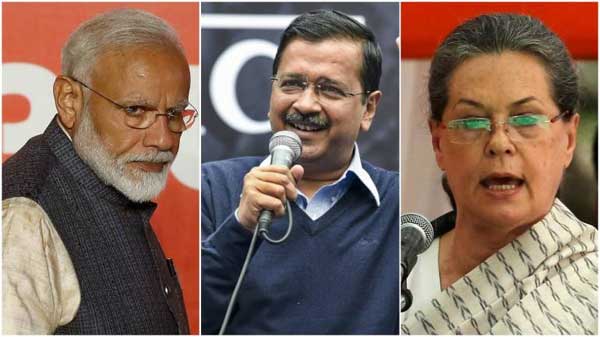 The predictions differed only in terms of the margin of victory. The AAP’s tally will fall somewhere between 44 and 68 in the assembly of 70, according to the exit polls.