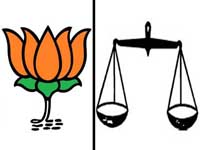 By Jaideep Sarin
Chandigarh, Aug 9 (IANS): Sworn allies in Punjab for over three decades, the Bharatiya Janata Party (BJP) and the Shiromani Akali Dal are political foes in adjoining Haryana. Weird?
The BJP and the Akali Dal have been running an alliance government in Punjab since 2007. The Akalis are also part of the BJP-led National Democratic Alliance (NDA). Harsimrat Badal, from the Akali Dal, is a minister in the Narendra Modi government.
In Haryana, which goes to the polls later this year, the Akalis have, however, stitched an alliance with the Indian National Lok Dal (INLD).
The BJP, which has a tie-up with the Haryana Janhit Congress (HJC) led by Kuldeep Bishnoi, son of former chief minister Bhajan Lal, is all set to oppose the INLD-Akali Dal alliance and the ruling Congress.
The Akalis, especially its seniormost leader and Punjab Chief Minister Parkash Singh Badal, have put the BJP on a sticky wicket by siding with the INLD - and by raking up the row over the control of gurdwaras in Haryana.
In Punjab, Badal asserts that the alliance with the BJP is "forever". But the same does not hold true in Haryana.
With the BJP eyeing its first major electoral victory in Haryana's assembly polls, the controversy and violence associated with the control of Haryana gurdwaras could not have come at a worse time - just before the assembly elections.
The BJP national leadership had to, behind the scenes, restrain Badal recently from taking the gurdwaras matter too far as this could affect the BJP in the coming elections.
In the recent Lok Sabha polls, the BJP won seven of the 10 parliamentary seats in Haryana. This was the best performance by the BJP, which did not have a solid political base in Haryana.
The BJP had contested eight seats in the state.
The BJP's alliance partner, HJC, lost both the seats it contested, Hisar and Sirsa. The two seats were lost to INLD candidates who were supported by the Akali Dal.
In fact, the INLD candidate and winner of the Sirsa seat, Charanjit Singh Rori, was an Akali Dal legislator earlier.
On the Hisar seat, HJC president Kuldeep Bishnoi, whom the BJP had once projected as the future chief minister of the BJP-HJC alliance, lost by around 32,000 votes to INLD's Dushyant Chautala, great-grandson of former deputy prime minister Devi Lal.
Badal went and campaigned for the INLD candidates on both seats, which technically meant that he was opposing the BJP-HJC alliance.
Badal had tried, before the Lok Sabha polls, to forge an alliance between the BJP and the INLD, but the BJP leadership opted for the HJC.
The BJP and INLD have in the past been politically together and even ran an alliance government in Haryana.
For the BJP and the Akali Dal, political friendship seems to end at Punjab's border with Haryana.