NDA will get simple majority at 279: NDTV exit poll 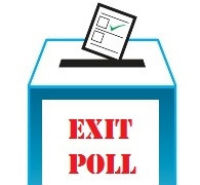 New Delhi, May 15 (IANS): The BJP-led NDA will get a simple majority of 279 seats, whereas the Congress-led UPA will be decimated to a mere 103, an exit poll by NDTV news channel claimed Wednesday.
The Bharatiya Janata Party alone will get 235 seats, whereas the Congress will come down to two digits at 79.
The BJP-led National Democratic Alliance's ride to victory will be largely due to a thumping performance in the Hindi heartland, with 56 seats in Uttar Pradesh alone.
The coalition will bag 21 seats in Rajasthan, 12 in Jharkhand, 22 in Bihar and nine in Chhattisgarh, said the exit poll.
The Congress will not be able to open its account in Seemandhra region of Andhra Pradesh, whereas in Telangana, it will manage only three seats.
The BJP's alliance with N. Chandrababu Naidu's Telugu Desam Party will help the NDA score 13 seats in Seemandhra.
In Gujarat, Madhya Pradesh and Karnataka, the NDA will score 22, 24 and 16 seats respectively.
The only solace for the United Progressive Alliance will be in Bihar, where the Rashtriya Janata Dal-Congress coalition will score 14 seats.
The coalition will get 70 percent of the minority votes, the exit poll said.
Seventy percent of Yadavs too would support Lalu Prasad's RJD, with biggest loser being the Nitish Kumar-led Janta Dal-United, which will come down to only four seats.
Arvind Kejriwal's Aam Aadmi Party will manage to win 31 percent vote share with two seats in Delhi, where the remaining five seats will go to the BJP. The AAP will get another two seats in Punjab.
The caste factor will be crucial in Uttar Pradesh where a chunk of Muslim votes (23 percent) will go to the Samajwadi Party which will win 12 seats, the exit poll said.
The Bahujan Samaj Party will get 23 percent of the Muslim votes and win only eight seats. The Congress tally will come down from 22 in 2009 to only four seats this time.
In Maharashtra, the BJP-Shiv Sena alliance will get 34 seats with only 13 left for the UPA. Raj Thackeray's Maharashtra Navnirman Sena will get only one seat, it said.
The total number of seats won by non-NDA and non-UPA parties will be 161. These will include 30 seats of Mamata Banerjee's Trinamool Congress, and 32 seats of Tamil Nadu Chief Minister J. Jayalalithaa's AIADMK.

Title: NDA will get simple majority at 279: NDTV exit poll