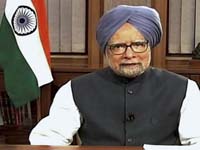 New Delhi, May 14 (IANS): Congress president Sonia Gandhi Wednesday hosted a farewell dinner in honour of Prime Minister Manmohan Singh here.
Union ministers and Congress general secretaries were among those present at the dinner at Gandhi's 10 Janpath residence.
The dinner was held two days before votes polled in the Lok Sabha election are counted May 16.
The prime minister will submit his resignation to President Pranab Mukherjee May 17.
Manmohan Singh had On Jan 3 addressed his final press conference and announced his retirement after a decade at the helm of two successive United Progressive Alliance governments.