Mangaluru, Dec 9: A 40 year old (female) was feeling uneasy over the last six months, often tired, fatigued and breathless on doing any work. She felt bloated and heavy. She was married for just 3 months and was anxiously looking forward for a pregnancy. Her periods had been heavy and prolonged.

On consult for a fever with her family physician he found out that she was severely anemic and was given Injectable iron. When further evaluated she was detected to have a multiple fibroids, almost 7-8 months pregnant uterus size with largest one measuring 25 cm . She was offered open surgery to remove fibroids as they were very large in size and also was warned about possibility of removal of uterus in case of severe bleeding during the surgery. 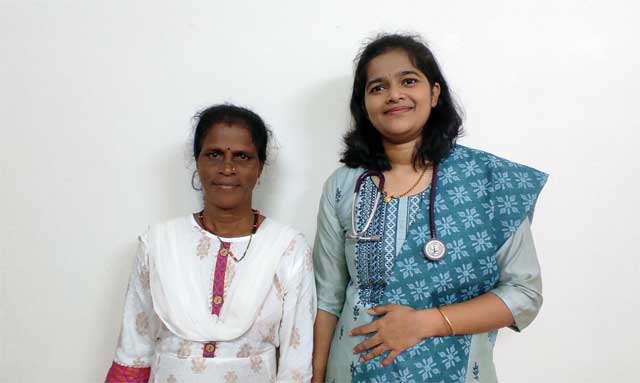 However, she met Dr. Arthika Shetty at AJ hospital and Research Centre. Dr. Arthika reassured her that these fibroids could be removed laparoscopically through a small incision. Keyhole surgery would ensure that her recovery was faster with less blood loss, hospital stay, less chance of infection or hernia and more cosmetic.

She trusted the Doctor and her team and proceeded with surgery with anesthetic team headed by Dr Gururaj Tanthri. The procedure went smoothly and she was discharged in 2 days. Her recovery was fast and it surprised her relatives considering the fibroid weighed 2 kg. Perhaps this is one of the largest fibroids removed through minimally invasive approach in this region.

Fibroids are common non-cancerous tumors in the uterus. In most they don’t cause any problem, in some it can cause heavy periods, painful periods, infertility recurrent miscarriages, anemia or pressure effect on surrounding organs due to the large size.

Numerous major laparoscopic surgeries have been performed at AJ Hospital and Research Center, Mangaluru. It has been a referral center for advanced
gynecological laparoscopic procedure. It has state-of-art operation theatre with advanced technologies, robotic systems, instruments and surgical ICU.

Apart from pregnancy and delivery, infertility services and advanced laparoscopic surgery for complicated gynecological problems like endometriosis are available.