Akola (Maharashtra), Nov 17 (IANS): Congress MP Rahul Gandhi on Thursday challenged the government to stop the ongoing Bharat Jodo Yatra (BJY) "which is conveying the message of love - not hatred - among the people of India".

Referring to certain Balasahebanchi Shiv Sena (BSS) leaders questioning the need for the BJY, he said that it is intended to "connect" the country, "hear" the voices of the masses, and spread the message of love through the march. 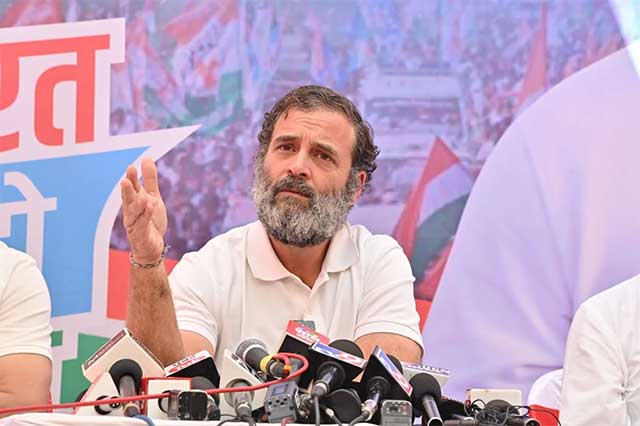 "If the government still feels they want to stop it, then let them do it... No problems. I have decided to continue it from Kanyakumari to Kashmir and hoist the tricolour in Srinagar," declared Gandhi, in a media interaction here this afternoon.

Touching upon the statements by certain Bharatiya Janata Party leaders that "when the country is not divided then where's the need to unite it" through the BJY, Gandhi said that the country's atmosphere has completely changed in the past 8 years, with hatred seen all around.

He said that the BJY is countering the ideology of those who spread "hate" with the idea of "love" by those who work to unite the country as hatred makes the nation weak while love strengthens it.

"Lakhs of people are joining the BJY... Farmers, workers, youth, shopkeepers, women, speak of their issues, problems, pains and suffering during the march, I am learning a lota We are getting a tremendous response and we are being showered with love," said Gandhi.

Referring to V.D. Savarkar issue, Gandhi waved and read out a letter written by the revolutionary to the British government, saying he (Savarkar) wanted to be a servant of the colonial rulers.

"What wrong have I said? I have only presented the historical truth. Mahatma Gandhi, Pandit Jawaharlal Nehru, Sardar Vallabhbhai Patil and others were also jailed by the British for years but they did not secure their release by writing (such) letters to the colonial rulers," Gandhi pointed out.

During the BJY, he said he was "listening to the voice of the farmers, workers, youth and women" of the country, which "the government of India is not hearing" and how the voice of the opposition is also being suppressed.

"Whenever we, the Congress and other Opposition parties attempt to raise the concerns of the masses like demonetisation, economy, GST inflation, China, in the parliament, the mikes are switched off, there is pressure on the institutions and the judicial system from the ruling party," Gandhi said.

Through the BJY, he is highlighting all these questions, and learning how the people are living under the shadow of fear, hatred and violence, he said.

Dwelling upon the major problems of the people that he encountered during the BJY, Gandhi said these pertain to the farmers and the youth of the country, who feel "they have no future", but he was questioning and demanding answers from the government.

"Farmers are in distress, they don't get the due price for their produce, no compensation, loan waivers or insurance claims for crop losses. When the (former) UPA government was in power, we gave the farmers all help they needed. The youth of the country are worried as there's no guarantee of jobs even after getting the necessary qualifications and skills, spending money taken on education loans," Gandhi said.

He said that if the farmland suicides have to be stopped, then they need proper support and timely help, they are the people who feed the nation and it's the responsibility of the government to stand behind them, just as the UPA government had done in the past.

"The youth are facing a similar scenario. Young boys and girls say they are acquiring education, but not one youth I met was confident that he/she will get employment. Their parents work hard, borrow from various sources and mostly spend it on private colleges for education, inflation is high, and the future is bleak with no jobs for their children. The government is not paying attention to all this," said Gandhi.

Slamming the BJP, Gandhi said that all out attempts are being made to end the Opposition parties in the country with the lure of money power, citing the Maharashtra example.

He mentioned how a Shiv Sena-UBT MLA informed of a Rs 50 crore offer to join the rebel group but he refused, and the erstwhile Maha Vikas Aghadi government in the state collapsed in June.

"The Shiv Sena-UBT MLAs were given Rs 50 crore and taken away by the rival camp. Corrupt people are going there and efforts are on to decimate the Opposition parties. But there's no dearth of good and honest people in the country," declared Gandhi.