Bengaluru, Oct 6: Karnataka has been in the forefront of digitisation in agriculture sector and so far 78 lakh farmers are brought under this ambit by linking farmers, survey number and Aadhar details, said Chief Minister Basavaraj Bommai on Thursday.

Participating in a video conference with Union Home and Co-Operation Minister Amit Shah regarding the natural farming and digital in farming at 'Krishna' home office here on Thursday, he mentioned about Union Agriculture Principal Secretary about Karnataka ahead in digitalisation of the agriculture sector.
The State had already digitised Bhumi software and included 62 lakh landowners and 16 lakh landless farmers in the software.

'Fruits software was now being emulated by other states. This software is being improved regularly. The State has taken up the 'Swamithva' scheme of the Central Government as a campaign, he added. 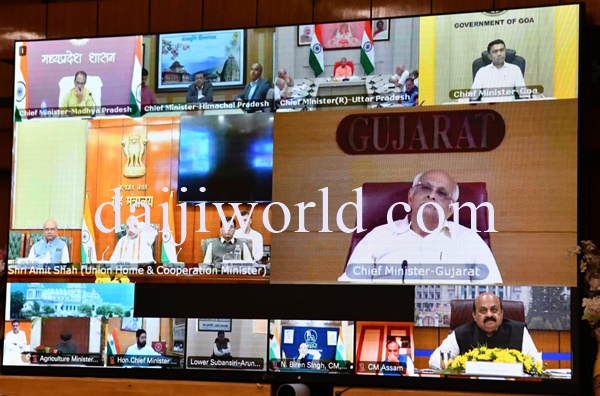 The Chief Minister said the Nano Urea is revolutionary in the field of agriculture and the first nano urea unit is in Bengaluru.

It was introduced to farmers after a detailed study. There will be a good response and support to it in the country in the coming days.
Bommai said through the digital technology farmers themselves are surveying their land and so far, 212 crore plots has been digitised.

Farmers are doing the crop survey on their own and have done the survey of 16,584 crops of the total 212 crore.

The Agriculture Department has done the survey of 1.61 crore area. To avoid any complications, steps are taken for all farmers to do the survey themselves. So far, they have done it very honestly. Natural farming is a longtime project and the research and certification are very important.
State active in natural farming

As per the wishes of Prime Minister Narendra Modi to double the farmers' income, Karnataka, Maharashtra and Gujarat have taken up natural farming actively.
The State has five agriculture and horticulture universities and natural farming has taken up 1,000 acres of land under the continuous monitoring of varsities.

A total of 41.434 farmers were selected for natural farming and designed 1100 training programmes and 200 field visits besides workshops. In all this scheme is being pursued as a mission. Impetus has been given to protect the soil health with the use of natural manure, he said.