Udupi, Oct 5: Though many differences have cropped up in terms of religion, the communal harmony among people of various communities still continues in the district. The Hindus of the coastal region tie paddy saplings in their houses and eat the new meal (Hosathu) and a Christian farmer always gives the required paddy for this festival.

Lawrence Vaz is the good Samaritan who provides paddy saplings to Hindu temples and Garadis. Nowadays the number of farmers growing paddy is reduced. So it is difficult to get the paddy saplings. This year crop is also lost due to heavy rains. 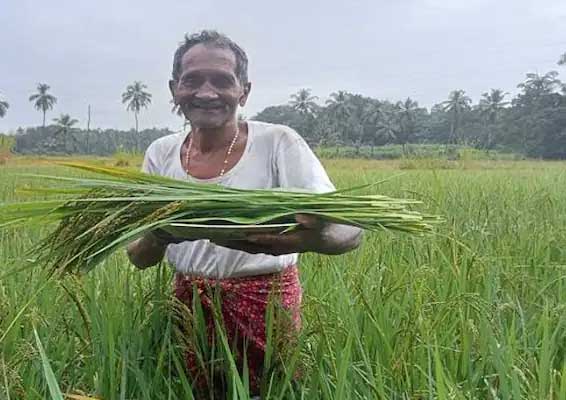 Resident of Sanoor in Karkala, Lawrence Vaz gives the paddy saplings free of cost for the festival. He says, “I have been giving the paddy sapling (Koralu) since many years. However, this year I have given highest number of saplings.” Hiriyangadi Sri Durgaparameshwari temple, Venugopal temple and six other temples plus two Garadis where Daivas are venerated have taken paddy saplings from Lawrence. In addition, he has given Koralu to more than 100 families.

“This is a divine work. That is why I feel happy and proud to give paddy saplings. In future also I will do the same,” says Lawrence Vaz.

In coastal region, if anyone asks for Koralu no one will object. If someone removes the same from the paddy field without asking permission also no farmer questions.

The Christians of coastal region also celebrate feast of paddy saplings on September 8. On that day they eat only vegetarian dishes on a plantain leaf. Most of the overseas Christians of Dakshina Kannada and Udupi visit their native place during the festival.

Due to these unique celebrations, the coastal region is known as the hub of culture and traditions.