The procession will start from the historic August Kranti Maidan on Sunday afternoon from 3 p.m. onwards, and culminate at the Gandhi statue near Nariman Point where the participants will take a national pledge. 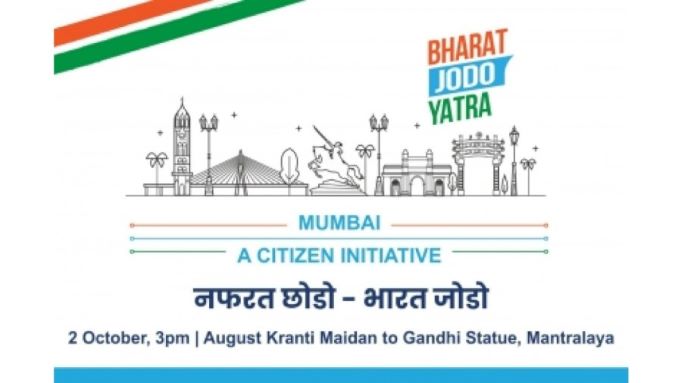 "The yatra theme is 'Nafrat Chhodo, Bharat Jodo', 'Save Constitution, Save Democracy' and is a joint initiative of all non-BJP parties, peoples' organisations, civil society groups and other like-minded movements," said one the participating groups, Trade Unions Joint Action Committee Convenor Vishwas Utagi.

Friends of Democracy leader Ashutosh Shirke said that all have come together "to unitedly fight the evils like politics of hatred, divisions and violence that is destroying the nation and its secular fabric".

The aim would be to counter hatred with love, harmony and peaceful co-existence among all people irrespective of religion, caste, region, language, geographical backgrounds, etc. which is the very 'idea of India', they explained.

Utagi said that since Independence, which was achieved with the unity of all groups and parties, all have enjoyed equal rights in the country with the Constitution granting equality to all, and "it is our utmost duty to protect and defend the freedom of our country, democracy and Constitution".

"As equality is the main basis of India's national unity, the defence of the Indian Constitution will be the protection of the country and our freedom," pointed out Utagi.

The organisers have slammed the current BJP regime at the Centre for adopting "a clear strategy to spread hatred among the people on the basis of religion, caste, region and languages".

This in turn weakens the masses as they suffer under unprecedented levels of inflation, high unemployment, deprived of quality education and healthcare plus other critical national problems which remain ignored.

"This government is busy privatising and selling our national assets and natural resources to its crony-capitalist oligarchs. We shall defend our resources and demand the 'Right To Work' for all. We are committed to development based on decentralisation and democratic values," said Utagi.