The arrested are identified as B. R. Naidu, KPCC social media former chairman and one Gagan Yadav, a resident of Devadandra in K. R. Puram in Bengaluru, Pavan, Sanjay and Vishwanath. 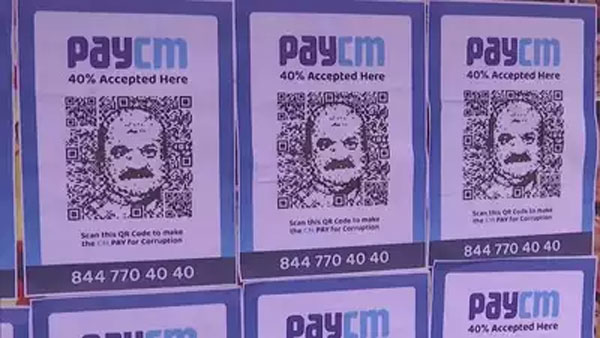 High Grounds and Sadashivanagar police have carried out the operation and nabbed the accused following the instructions by the CM Bommai to initiate the investigation in this connection.

The PayCM posters had come up on the streets of Bengaluru, with CM Bommai's QR code. If the QR code is scanned, it would lead to a page which contained corruption charges against the ruling BJP.

Bengaluru Police Commissioner Pratap Reddy has stated that the case regarding PayCM posters has been registered under the Public Post Disfigure Act. A case was registered in four police stations of Bengaluru.

Ruling BJP and Congress had begun a war of QR Code posters over corruption charges against each other. Opposition Congress came with the idea first by releasing "PayCM" Posters, and BJP responded with QR code posters containing Opposition leader Siddaramaiah and State Congress President D. K. Shivakumar on Wednesday.

The PayCM poster released by the Opposition Congress unofficially had a portrait of the Chief Minister Basavaraj Bommai in the poster, if scanned it will lead to '40%sarkar.com' website.

The authorities have pressed the services of BBMP personnel to take off the posters from walls, establishments in Bengaluru. BJP MLC M. Ravikumar stated that "Congress leaders have put up our CM to carry out campaigns, they should make their payments to Rahul Gandhi," he chided.

Answering a question about the 'PayCM' campaign, CM Bommai maintained that he had ordered an inquiry into the issue to find out who is behind the propaganda. "Anyone can do this with basis. People will understand, they don't hold ground," he said.

"It's not about my image, they are trying to dent the image of the state and that is why action would be taken against them," he said.