Dubai, Sep 21: Excitement is in the air. As UAE is all set to host the historic and most awaited event the Nihal Tauro live in concert. For sure, the first ever live performance by Nihal Tauro, Velita Lobo, and MAD in Kudla in this part of the world in this magnitude will be a musical treat to watch.

With just few days to go, UAE’s much-talked about event Nihal Tauro live in concert is all set to stage at Sheikh Rashid Auditorium, The Indian High-School, Oud Metha - Dubai on Saturday October 8, 6 pm onwards organized by Precious Parties along with USWAS-Shirva. 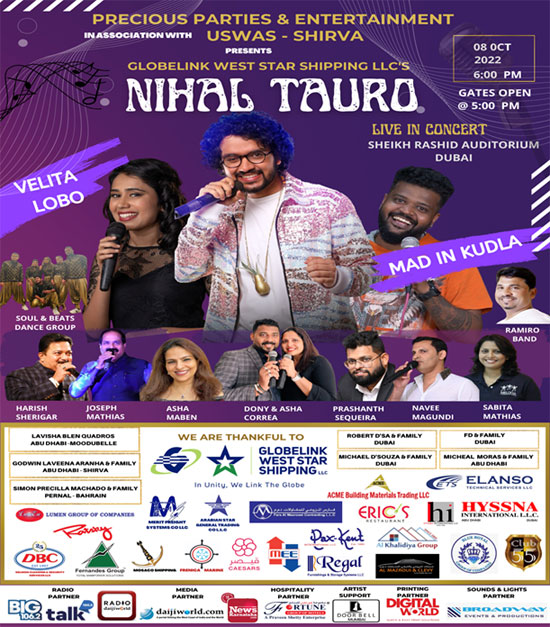 The organizers are working hard behind the scene to make the event great fun to watch with a promising high-quality musical live and super-talented singers, musicians, dancers to perform on stage.

The event has already created tremendous interest among the music lovers and generated a multicultural fan base of the artistes. Audiences and supporters from all over UAE and from GCC have lined up to attend the show. A houseful audience of 1,500 is expected to witness the show, which could bring high acclaims for a mega event in UAE. The organizers have slated the show to be a mega hit with an upbeat responses and support that they have received towards the event so far. Fans can expect to discover the best live music, tailored to their music taste.

The singing sensation Nihal Tauro will treat his fans to a grand live event showcasing his highly acclaimed vocal style. Velita Lobo will join with her melodious vocals to enthrall the audience. Arpith Indravadan popularly known as MAD Kudla will be up on stage with his stand-up comedy. Highly acclaimed local talented singers and musicians will amaze all with their scintillating performances.

The entertainment at the dazzling event will include amazing performances from popular singers of the community like Harish Sherigar, Sabitha, Navee Magundi, Joseph Mathias, Asha Maben and Prasanth Sequeira. The show will have band of musicians led by Ramirio Band who are well known for complimenting the singers to perfection. The team consists of musicians who play highly electrifying rendition of Bollywood, Kannada and Konkani hits in their instrumental form. Gautam Bangera and his Soul & Beats Dance Academy troupe will be performing and entertaining the crowd during the live show with their foot tapping moves.

The much-awaited mega event Nihal Tauro Live in Concert will be compered by the most creative, multi-talented, power couple Dony Correa and Asha Correa.

The organizers have promised a spectacular unforgettable event full of entertainment from the young talented and popular performers. The show is going to be multi- language Hindi, Konkani, Kannada and Tulu. It is an open for all event.

Many individuals and companies have supported this event in the capacity of sponsors.

The event will be managed by Broadway Events and Production to entertain with their sound, lights, stage set-up, and techno audio-visuals.

The media partner of the event is Daijiworld.com.

The event will start on time. Gates will open by 5 pm. The organisers have asked the audience to occupy their seats before 6 pm.

The tickets costing AED 100 are sold out. Few tickets of AED 75 and AED 50 are remaining.