Kolkata, Dec 7 (IANS): BJP supporters and police clashed on Monday in at least four places in Siliguri, including Tinbatti intersection and Phoolbari Bazar, over a protest march towards Uttarkanya, a Mini-Secretariat building in north Bengal.

The incident occurred when BJP supporters tried to break through barricades and threw stones at police, which used water cannons and tear gas in a bid to disperse them.

The party claimed one person was killed, though the police did not confirm it. Many other protesters and policemen were injured in the melee as security forces baton-charged the irate protestors. 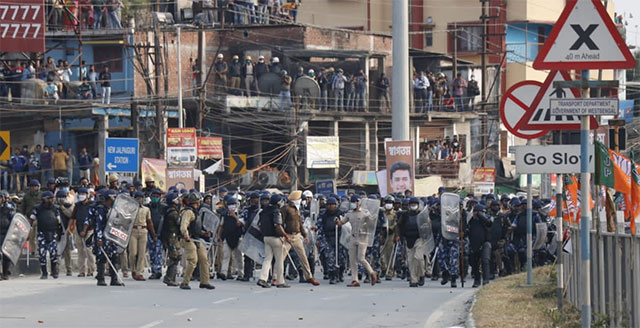 BJP state unit President Dilip Ghosh said: "One of our party workers was injured in the baton charge and he died in hospital. Deceased Ulen Roy, 50, was a resident of Jalpaiguri's Gajoldoba area."

Ghosh led a big rally to Fulbari Bazar - one of the two points to approach the Mini-Secretariat building.

The protest march, as part of the 'Uttarkanya Abhijan', was organised by the Bharatiya Janata Yuva Morcha (BJYM) against the alleged misrule of the Trinamool Congress government in West Bengal and not fulfilling the promises made to the people of north Bengal.

"Many BJP activists have been injured during the peaceful protest. Democracy is being murdered in West Bengal," Surya told media persons.

Sources said that Vijayvargiya and Surya later were escorted to their vehicles by their personal security guards as the situation went out of control.