Mumbai, Jan 29: A moment of corporate history was recorded when two of the greatest industrialists came together. At the annual TiECon event in Mumbai on Tuesday, Infosys co-founder Narayan Murthy was presenting an award to Ratan Tata on the stage, but, what came next won the internet over. Murthy was seen bending down to touch Tata's feet as a sign of respect. A video of the moment was fondly shared by Ratan Tata, on his Instagram stories. As per a PTI report,  the chairman emeritus of Tata Sons Ratan Tata was being honoured with the Lifetime Achievement Award at the 11th edition of TiECon Mumbai. 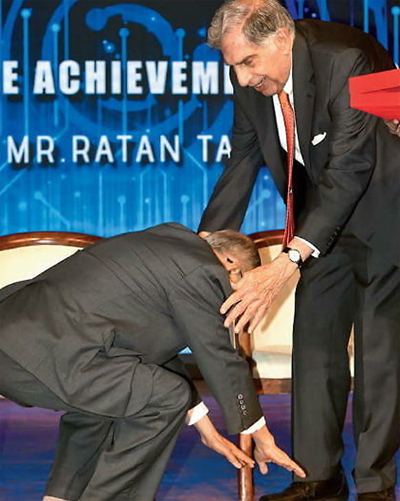 "It was an honour to be awarded by TIEcon at the hands of a great friend Mr Narayana Murthy," wrote the 82-year-old while sharing the video that shows Murthy (73) presenting him with the award and then touching his feet.

Photos of the 'touching gesture of humility' was also shared on Twitter by the event organisers.

"Sri Ratan Tata's lasting legacy is the highest standards of ethics and integrity that will guide entrepreneurs in their journey for decades to come. The awardees of the Hall of fame have shown exemplary courage, passion and foresight in being disrupters who have created wealth and opportunities for thousands," said Atul Nishar, President, TiE Mumbai.