Belagavi set to script history with 57 candidates in fray, EC to use ballot units

Belagavi, Apr 22: Karnataka’s proposed second capital Belagavi is all set for a historical Lok Sabha election, scheduled on April 23, this time with record 57 candidates in fray.

Among the 28 Lok Sabha constituencies in the state, Belagavi in North Karnataka has the highest number of candidates this time. To deal with such an unprecedented challenge, the Election Commission - for the first time in the polling history - is using four ballot units in one polling station.

To draw the nation's attention to the burning border dispute, the Maharashtra Ekikaran Samiti (MES) has fielded a whopping 47 candidates. Earlier, it had decided to field 101 candidates but had to bring down the number as it could not arrange the minimum deposit for all the candidates. Apart from 47 MES candidates, there are six candidates from various political parties and independents, totaling up to 57 candidates. Their fate will be sealed on April 23. 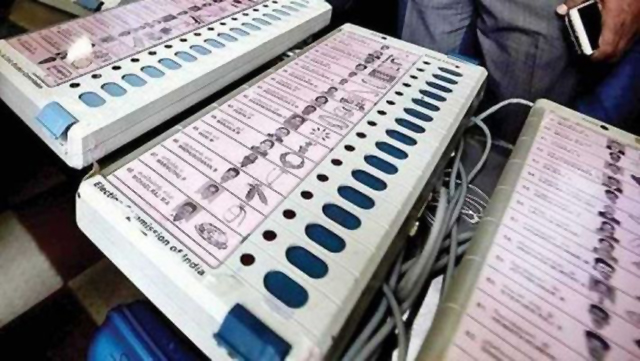 In fact, Belagavi had also attracted attention in 1996 when 456 candidates were in the fray for the Lok Sabha election. But the polling was held in the ballot paper then. It may be recalled here that the Election Commission had postponed the elections for one month to print ballot papers for 456 candidates. Shivanand Koujalgi from Janata Dal had won the election. The ballot papers used in that election is now a treasured piece.

During that time, all the candidates of MES had lost their deposits. Learning from that election, the Commission decided to raise candidates' minimum deposit to Rs 25,000 (for General candidates) and Rs 12,500 for candidates belonging to SC/ST communities.

Owing to the increased deposit amount this time, the MES backtracked from its grandiose plan to field 101 candidates. Instead, it brought down the number to 47 candidates who mostly belong to SC/ST communities among Marathas. Currently, there are 2.5 lac Maratha voters in Belagavi but they are not necessarily MES vote bank. For MES, this election is just another gimmick to draw the attention of the nation than to fight election to serve the people.

All eyes on Belagavi City Corporation

Recently, the Commission has developed M3 EVM machines which can hold 256 candidates' names and one NOTA button. Such a machine was used in Bruhat Bengaluru Mahanagara Palike, informs Chikkodi returning officer KV Rajendra.

This is for the first time that four ballot units will be used in a single constituency, ever since the EVMs were put to use in Karnataka. As many as 2,064 polling booths have been set up in Belagavi Lok Sabha constituency. Prior to nomination filing, a total of 2,500 EVMs were provided but with the increased number of candidates, as many 6,000 ballot units have been commissioned. This will be a different experience for the voters who will have to scour four ballot units to vote for their preferred candidates. Besides, this will certainly have an impact on the voting percentage.

Title: Belagavi set to script history with 57 candidates in fray, EC to use ballot units