New Delhi, May 2 (IANS): Russia said on Monday that its armed forces continue to strike important military infrastructure of Ukraine with high-precision missiles, including the Iskander-M which destroys air and missile defence systems as well as other important objects at a distance of up to 500 km.

Releasing a video on the operation today, the Russian Defence Ministry showed how the Iskander-M operational-tactical missile system destroys an entire battery of Smerch multiple launch rocket systems of the Armed Forces of Ukraine with a high-precision strike. 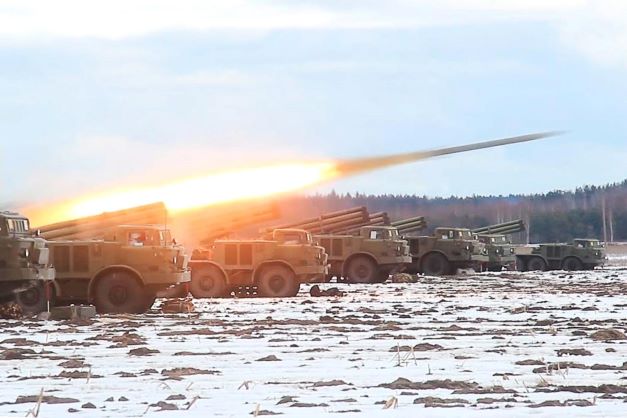 "Intelligence calculated the positions of the rocket artillery of the Armed Forces of Ukraine. In the sky, an unmanned aerial vehicle controls the target. At a distance of hundreds of kilometers from the enemy, 'Iskander-M' hits the enemy in the heart. In place of the explosion, a sea of fire and a column of smoke. Dozens of destroyed strategic facilities of the Armed Forces of Ukraine have already been accounted for by such complexes," said the ministry.

Iskander, claims Russia, is the only operational tactical missile system in the world that uses both ballistic missiles and cruise missiles. It is capable of flying at the lowest possible altitude along the trajectory set by the operator and can bend around the terrain, which makes it invisible to enemy air defences.

"Not a single modern air defence system is capable of repelling our missile attack. The complex is not afraid of enemy electronic warfare and it is almost impossible to intercept the Iskander missile," said the head of Iskander-M Operational-Tactical Missile System (OTRK) crew.

Highlighting the success of its strikes in the course of the 'special military operation' in Ukraine, Russia said that the system has no analogues in the world as the forces are able to hit targets in the tactical depth of the enemy.

"The crew copes with the fulfillment of the assigned combat mission of hitting critical enemy targets such as warehouses of artillery and missile weapons, fuels and lubricants, command posts and headquarters of the Armed Forces of Ukraine. The mobility of this complex helps to quickly change its location, which does not allow the enemy to calculate our location in time and strike back," the crew chief added.

Moscow had on Sunday also said that its another high-precision missile 'Onyx' had destroyed in the region of Odessa a hangar with weapons in a military airfield which stored ammunition received from the United States and European countries. A newly-constructed runway was also bombed.

"High-precision air-based missiles of the Russian Aerospace Forces hit seven military facilities in Ukraine. Among them: four areas of concentration of manpower and military equipment, as well as three depots of rocket and artillery weapons and ammunition in the areas of the settlements of Beryozovoe of the Donetsk People's Republic, Slation and Barvenkovo of the Kharkiv region," said the Russian Defence Ministry spokesperson during his daily briefing.

Russia also said that it has rescued 80 civilians, including women and children, who were held by Ukrainian nationalists, at the Azovstal plant in Mariupol.

"Civilians evacuated by Russian servicemen from the Azovstal plant who wished to leave for areas controlled by the Kyiv regime were transferred to representatives of the UN and the International Committee of the Red Cross," said the Russian Defence Ministry.