Kasargod, Jan 22: Well-known philanthropist, social worker Sairam Gopalkrishna Bhat passed away on Saturday January 22 at his residence at Kilingar. He was 85.

Bhat had identified 265 financially poor families cutting across religion and caste and got their houses built. He helped many families to start self-employment. Many families received financial assistance from him.

He was a dedicated devotee of Sri Satya Sai Baba and had built the Sai Mandir in Kilingar. He was better known as Sairam Bhat in Kilingar. He organized several social programmes including free medical camps. 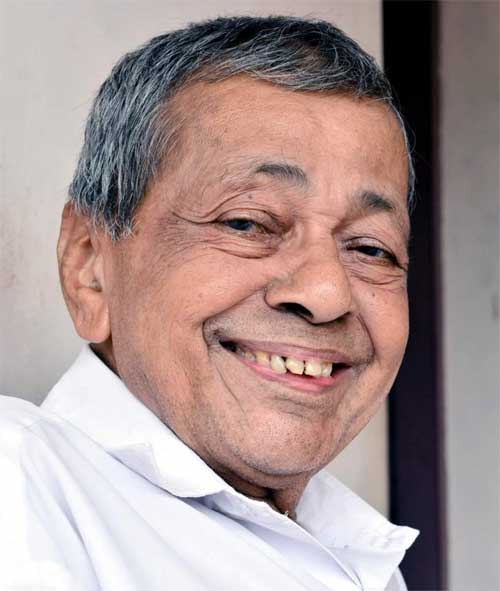 He tried to uplift the downtrodden section of society. His selfless service to society has a rich history of several decades. He had started free medical camp 25 years ago. Even today, many organisations hold similar free medical camps in the district. From 1996 to 2015, Bhat had organised 933 free medical camps. He gave free medicines to lacs of people. He never used to celebrate his birthday with grandeur.

Bhat was born in 1937 at Neerchalu in Kilingar. He was a Talim trainer initially. Then he owned buses and also involved himself in agricultural activities. Later his mind drifted towards social work. People who are sick, unemployed, not having their own houses, finding it difficult to complete education and financially poor used to tread the road of Sai Mandir of Kilingar. He used to say that he gets unparalleled happiness when people who received help from him used to smile.

Around 25 years ago, Dr Keshava Bhat, who used to work as a doctor in a private clinic in Kasargod, came in search of Bhat. He kept his vision of free medical aid to financially poor people of the society before Bhat. Later, social work became his only aim in life.

Though Dr Keshav Bhat left Kasargod after completing his medical service in the district, the free medical camps did not stop. They continued in the midst of countless hartals and bus strikes. Hundreds of people from nearby and far off districts used to get the benefit of these camps. In every camp, more than 700 people used to participate according to the information provided by the locals.

Dr K K Nair, who used to examine the patients at the free medical camp said that the beneficiaries of the medical camps were given 15 days of free medicine. The doctors used to treat all ailments including AIDS and cancer. Dr Mohan Kodoth, Dr Satyanarayana, Dr Srinidhi Saralaya, Dr Beena C Shetty and Dr Sunil used to attend to the patients in the free camps.

Bhat will be remembered for long for the selfless service he gave to the downtrodden and poorer section of the society. He has received countless honours and felicitations from local organisations and governments of both Karnataka and Kerala.