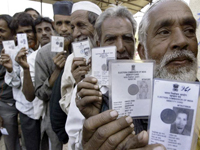 New Delhi, May 15 (IANS): The Election Commission is all set to count Friday some 550 million votes cast in the Lok Sabha polls that are widely expected to return the BJP to power, a top official said Thursday.
"We are fully prepared and geared up for the counting day tomorrow... There is absolutely no problem," Election Commissioner H.S. Brahma told IANS.
He said all data accruing from the nationwide counting process would be updated on the poll panel's web site after every five minutes.
Around 66 percent of the 814 million electorate voted between April 7 and May 12 across the country to pick a new 543-member Lok Sabha.
Exit polls at the end of the staggered election have predicted a win for the Bharatiya Janata Party (BJP) and its allies in the National Democratic Alliance (NDA).
Counting at 989 centres across the country will begin at 8 a.m. Friday, an official statement said.
A total of 8,251 candidates, including 668 women and five transgenders, contested the Lok Sabha battle. The contestants included 3,234 independents.
Friday's results will determine the political fortunes of India's virtual who is who, including BJP's prime ministerial candidate Narendra Modi (Vadodara, Varanasi), Congress leaders including Sonia Gandhi (Rae Bareli), Rahul Gandhi (Amethi), SP leader Mulayam Singh (Mainpuri, Azamgarh), JD-U leader Sharad Yadav (Madhepura), BJP leaders Arun Jaitley (Amritsar), Rajnath Singh (Lucknow), and AAP leader Arvind Kejriwal (Varanasi).
Although the vote count would start at 8, about one million officials drawn from the central and state governments would assemble at the counting centres much before that.
"All those involved in the counting have been told to report by 5 in the morning tomorrow (Friday)," another Election Commission official said.
"They will have to come without their mobile phones, and none of them will be allowed to leave until the entire process gets over," the official told IANS.
Initial trends will be available rapidly. The final tally in the Lok Sabha will be more or less clear by midday.
But most results will be known only by evening, one official said.
As polling ended in various constituencies spread over 10 rounds, the 1.72 million electronic voting machines (EVMs) were put in strongrooms across the country and placed under heavy security.
Tens of thousands of police and paramilitary personnel are to oversee the counting process Friday.
Brahma expressed appreciation over the huge voter turnout in what is the world's largest electoral exercise.
"We are grateful and thankful to the voters for turning up in such large numbers," Brahma told IANS.
"We are extremely happy that such a high voter turnout was registered this time," he said.