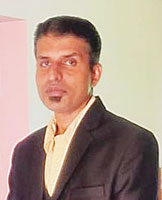 Mortal remains will be brought to the residence at Surathkal at 2.00 pm on Saturday, August 20, followed by funeral Mass in Sacred Heart Church, Surathkal at 4.30 pm.