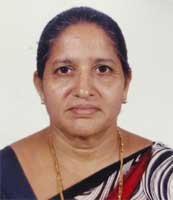 Pauline Saldanha nee Lasrado (69), the wife of the late Donald Lasrado, mother of Darel/Rachna Lasrado and Charel Lasrado/Brad Canby, daughter of the late Pascal and Eliza Saldanha, grandmother of Ethan and Rianna Lasrado, passed away on January 1, 2022.

Funeral on Monday January 3 with viewing at 3 pm at Bejai church followed by Mass at 3:30 pm.