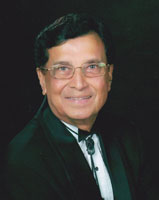 Memorial service will be announced by the Mangalorean Association of Canada at a later date.   At this time family has requested complete privacy.