Mangaluru, Jun 8: Incomplete text, repeated chapters, mixed-up syllabus - these are what welcome the students of higher primary and high schools to the new academic year in Bantwal taluk. At least eight schools have flagged the BEO over the faulty textbooks issued to their students this year.

"Teachers are expected to complete their syllabus on time, but with such textbooks how will the teachers teach and how can students study? There is a need for the education department to ensure that such blunders are avoided," says a teacher from a Vittal school on condition of anonymity.

For instance in the class 8, Kannada text book only has the first lesson ‘Buddhana Salahe’, the rest of it has mathematics subject printed on it. Similarly, the eighth standard Kannada medium’s mathematics textbook had Kannada language lessons in between. 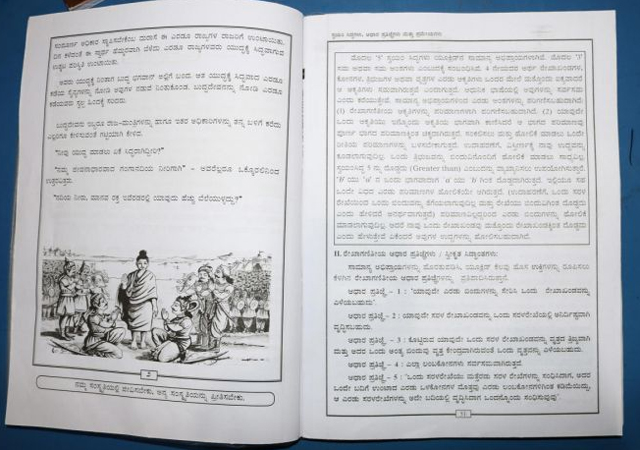 While the eighth standard social science textbook for English medium has also lessons printed in Kannada language, in the ninth standard text book the old and new syllabus have both been printed.

In some text books, pages are missing, leaving lessons incomplete while the seventh standard science textbooks may look a little bulky with lessons being repeated.

"Some of the books have been published by Diganta Mudrana and books with repeated lessons are published by Manipal Press," a teacher from Vittal informs.

Bantwal taluk block education officer Shivaprakash N says that the issue has been brought to his notice. "We have noticed that the books which have been distributed in Banwal taluk have issues. The BEO office has received complaints from eight schools and a total of 79 textbooks which have been distributed have been reported to be faulty. The textbooks with errors will be replaced," he says.

According to the BEO, some of the schools have already exchanged the faulty books with the correct textbooks.

He says the errors in the books are not a result of printing mistake, but seem more like a mistake while binding was done. We have informed the publishers about the faulty books, directing them to replace the books. A report has also been sent to the Karnataka Textbook Society, he adds.

"We have received complaints from schools from Bantwal taluk. We have sent notifications to schools in other parts of the district to check for mistakes in textbooks and inform the DDPI office. All the books with errors will be returned to the publisher and will be replaced at the earliest,” said DK deputy director of public instruction (DDPI) Shivaramaiah.

He also adds that the state education department, gives tenders to publish the textbooks to various publishers. Hence, the mistake is not in the syllabus but on part of the publisher, who has jumbled up the textbooks and pages while publishing.